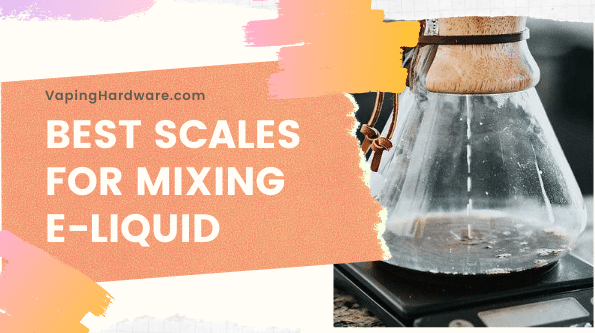 Before you mix e-juice by weight you’ll need to buy yourself a quality set of scales. We’ve put several through their paces to help you find the best scales for mixing e-liquid.

After mixing several batches of vape juice we whittled the list down to these five precision scales:

While all five are great scales the one that’s best for you depends mainly on how much e-juice you’re looking to mix in a single sitting. Other factors including reliability, accuracy and general ease of use.

If our five favourite scales for mixing e-liquid don’t quite match what you’re looking for, there are plenty more options available. But, there are a few things to consider before buying.

The ideal scales for mixing e-liquid should be accurate to 0.01 grams and have a ‘TARE’ function for setting the weight back to zero. Avoid any scales with a short ‘auto shut-off’ timer so they won’t turn off while your halfway through mixing.

Quick Note: We only review and/or recommend products we’ve tried and tested. If this post contains an affiliate link we may receive a small commission on any purchase made at no extra cost to you.

The Ascher pocket scale has the smallest weight limit on this list at 200g but a ton of great user feedback! It’s accurate to 0.01g and ideal for anyone mixing smaller batches of e-juice.

While it’s the smallest weight limit on the list, you’ll still be able to mix up to 190ml of e-juice in one sitting! (Table showing the maximum amounts of e-juice you can mix with different weight limits near the end of this post).

It measures 128mm x 78mm x 19mm and weighs 141g making it one of the more portable scales on this list. It’s powered by 2 AAA batteries (included) and has a clear blue lit LCD display.

There’s no tray included but the stainless steel weighing platform cleans up easily. With ‘TARE’ and ‘CAL’ (re-calibration) functions the Ascher is super easy to use and well worth considering.

These affordable Accuweight scales weigh up to a maximum of 300g and have an accuracy of 0.01%. They include ‘TARE’ and ‘CAL’ functions and are powered by 2 AAA batteries (included).

The Accuweight also has a large and easy to read LCD display with a bright blue back light. Measuring only 102mm x 71mm x 20mm and weighing in at 99.8g this is the most portable scale on the list!

I also loved the included tray that came with these; perfect for keeping any runaway e-juice off the actual platform. Easy to clean and even easier to use.

The Criacr digital pocket scale weighs up to a maximum of 500g and has an accuracy of 0.01%. It’s user friendly and includes two trays that are great for mixing e-juice. It also comes in a choice of four colors (green, red, black and silver).

These scales measure 127mm x 106mm x 19mm and weigh in at 222g. The LCD display has a blue back light for easy reading and the scale is powered by 2 AAA batteries (included).

It’s worth mentioning that the Criacr scale is the only one on this list that doesn’t have a ‘CAL’ function. You can still use calibration weights to verify the accuracy of it but you won’t be able to re-calibrate it if the accuracy is off.

Despite this it still has the much more important ‘TARE’ function and is just a great set to use. This is my favourite set of scales for mixing e-liquid. The batteries and two weighing trays are included and it’s just a well built reliable scale!

The AWS American is the ‘Cadillac’ of scales on our list. It’s got the highest price tag of all five but also the best build quality. With a 10 year manufactures warranty it’s certainly built to last!

Included with the scale are two 200g calibration weights and a mains adaptor. The AWS American can also be powered with 4 AAA batteries which come included.

With the biggest weight limit on this list these are excellent scales for mixing e-liquid in larger batches. Weighing up to a maximum of 2000g the Dipse scale lets you mix gigantic bottles of that ‘all day’ vape juice.

Despite having the largest weight limit on our list the scale measures only 130mm x 100mm x 20mm and weighs in at 181g. The Dipse scale also has an easy to read LCD display with an optional blue back light and is powered by 2 AAA batteries (included).

The scale includes two trays which come in handy for protecting the weighing shelf and using as e-juice mixing platforms. While not as accurate as the other four scales on the list, the Dipse is still accurate to within 0.1g; plenty precise for mixing e-liquid.

Why Mix E-Liquid by Weight?

Mixing by weight cuts the time it takes to mix e-juice in half and makes mixing a far less messy endeavor. We recently wrote a handy guide on how to mix e-liquid by weight which walks you through the steps.

Our E-Liquid Calculator also works out the amount of each ingredient you need to add to your e-juice and makes the process even easier!

The main ingredients in e-juice are vegetable glycerin (VG), propylene glycol (PG), nicotine and flavor concentrate (in VG or PG). But these ingredients all have different weights:

So having a set of scales that can weigh up to 500g doesn’t mean you can mix a batch of 500ml e-juice. How much you can mix with a 500g scale depends on the ratio of ingredients you choose to mix your e-liquid at.

The table below gives you an idea of the maximum amount of e-juice you can mix with different scale weight limits:

Should You Buy Calibration Weights?

If you’re on a budget you can also use something like a coin to calibrate your scales. As long as you know the exact weight of the coin (easily found with Google) you can use them to help you check the accuracy.

The only problem with this method is coins vary slightly in weight depending on when they were minted. You also run the risk of accidentally using a counterfeit coin with a completely different weight to that quoted online.

We hope you found our list of the best scales for mixing e-liquid useful. If you think there’s a set of scales we’ve overlooked or you have any questions about mixing e-liquid by weight we’d love to hear from you in the comments section below.