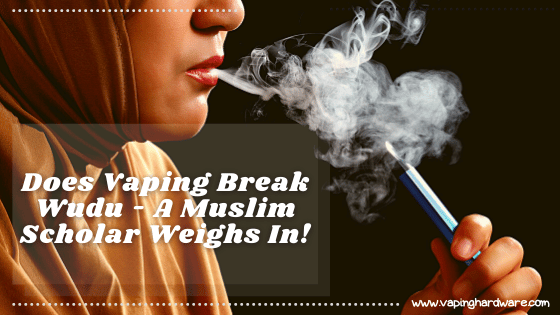 A Muslim friend of mine reached out to me recently with a question he’d been struggling with; does vaping break Wudu? Now I had no idea what (or who!) Wudu was, but I promised him I’d do a bit of research and find out!

Well I did the research (even reaching out to a Muslim scholar!) – gave him the answer and promised I would follow up with a brief post on my findings about whether vaping can break Wudu for our Muslim readers! And here we are…

The use of e-cigarette devices containing Nicotine is considered Haram and therefore prohibited in Islam. However, smoking or vaping will not break the Wudu (ablution). This is because there is a clear list of nullifiers of Wudu and none of these occur through the action of smoking or vaping.

So at face value, despite vaping a device containing Nicotine (or other harmful substances) being considered Haram, the actual act of vaping or smoking itself doesn’t break the Wudu.

We’ll dive into much more detail below.

BUT I want to preface this post by stating I am not a Muslim and my knowledge of the Islamic faith is limited. I am a vaping enthusiast and this post is not intended as a substitute for religious authorities, I am simply offering my opinion based on my research for those who are interested in this topic.

Please let me know in the comments if you feel I have misrepresented or misunderstood anything.

But enough of that, let’s get stuck in!

What exactly is Wudu?

( Wudu ) (Arabic: الوضوء‎ al Wudu ) is the Islamic ritual of washing, specifically before Salah (prayer). In general terms, think of this as a ritual purification or cleansing oneself before presenting yourself to God or reading the Quran.

Qur’an 2:222 “For God loves those who turn to Him constantly and He loves those who keep themselves pure and clean.” The Islamic prophet Muhammad is credited as having stated that “Cleanliness is half of faith.”

Wudu is governed by fiqh (Islamic Jurisprudence) with specific rules regarding hygiene and the rituals required. It usually involves washing the mouth, arms, feet, hands, head, nose, and other body parts with pure water.

Overall in Islam, there are three types of ablution:

Fard Wudu is not optional and must be completed before performing any prayer.

Wajib Wudu is optional and only required in certain circumstances if the individual is able to do them. An example of a situation in which Wajib Wudu would be required is the Hajj pilgrimage, during which a believer would circle the Holy Kaaba and require specific ritual cleansing in order to do so.

However, it appears the Mandub Wudu also often refers to cleansing performed before sleep. Please leave a comment below if this is something you can clarify.

As you can see, Wudu is the act of cleansing yourself before approaching God, reading the Quran etc. So before we can work out whether vaping could potentially nullify the cleansing, we need to look at whether vaping is even permitted in the Islamic faith.

Now whether vaping is allowed is a topic long debated, and something we could (and will!) write about in great detail. However, for the purposes of this post let’s sum up a couple of obvious issues that suggest vaping is likely to be Haram…

E-liquid contains Nicotine, a habit-forming, poisonous substance and Muslims are duty-bound to protect their health. Surah 2 | Verse 195 “And do not cast yourselves into destruction with your own hands”.

Certain types of e-liquid also contain alcohol, which is prohibited according to Surah 2 | Verse 219 “The sin is far greater than the benefit”.

Now of course, if the e-liquid you’re vaping doesn’t contain Nicotine or alcohol (or any pork derivatives!) then in theory it could be Halal. And in fact, a quick Google search will yield several e-liquid brands for sale claiming to be Halal and/or Kosher.

However, if you look at the bigger picture – the long term effects of vaping are still relatively unknown. And despite evidence showing it’s significantly better for you than smoking, it’s unlikely vaping could be considered healthy. Considering that fact, it could be argued that (just like smoking) vaping is a form of consumption that may damage or endanger health and is therefore Haram.

So does vaping break Wudu?…

Ok, so it’s clear that Wudu is a ritual purification or ‘cleansing’ completed before prayer, presenting yourself to God or reading the Quran. And in that case, if vaping is considered Haram then it would seem to logically follow that vaping breaks Wudu and leaves those of faith unclean?

BUT it’s not quite that simple according to the scholars muslimmessage.com and questionsonislam.com put me in touch with.

There are clear and very specific guidelines relating to exactly what nullifies Wudu, including activities such as urination, defecation, flatulence, deep sleep, light bleeding, menstruation, postpartum and sexual intercourse.

It’s a fairly extensive list of actions but what you’ve probably noticed however, is that the list doesn’t include vaping or smoking. Therefore (for now at least) it appears the act of vaping itself doesn’t break the ritual purification of Wudu.

Can I vape during Ramadan?

This is another issue that’s fiercely debated in the Muslim community. We wrote a post about vaping while fasting which you might find helpful. BUT generally speaking, a fast during Ramadan is a display of self discipline and therefore abstaining from vaping (or smoking!) would be preferable.

Where can I find more information about vaping as a Muslim?

We certainly hope to write more content on this topic in the future, but we also found this post to be a helpful resource you may want to check out.

I hope you found this post interesting and informative. Please bookmark this page, so the next time a Muslim friend asks “does vaping break Wudu” you can share this with them 🙂 Please also feel free to leave a comment below.