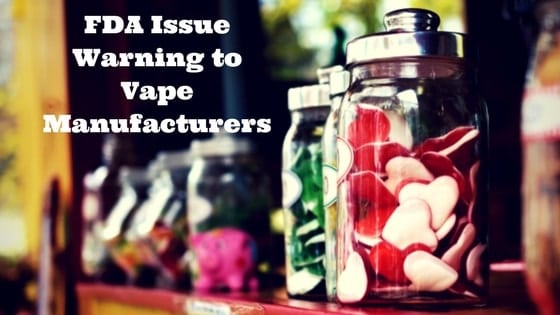 As part of the Youth Tobacco Prevention Plan, the FDA has released a press statement targeting manufacturers of e-liquid products resembling candy, food and drink. The full FDA press release was a joint statement between the U.S Food and Drug Administration (FDA) and Federal Trade Commission (FTC) designed “as part of ongoing efforts to protect youth from the dangers of nicotine and tobacco products”…

As part of this crackdown, a total of 13 warning letters were issued to manufactures, retailers and distributors of e-liquid “deliberately designed in ways that they can be just mistakenly confused by a child”, according to FDA Commissioner Scott Gottlieb.

It appears the particular issue here is not that the manufactures are specifically marketing to children. Rather “it is easy to see how a child could confuse these e-liquid products for something they believe they’ve consumed before, like a juice box”, Gottlieb comments.

It’s hard not to agree with Gottlieb on this point…

Twirly Pop, V’Nilla Cookies & Milk and Candy King Sour Worms are just a few of the e-liquid flavours targeted in the warning letters to the respective manufacturers.

FTC Chairman Maureen K. Ohlhausen commented that “protecting young children from unwarranted health and safety risks is one of our highest priorities”. The agencies cited a recent study conducted by the American Academy of Pediatrics (AAP) which confirmed a total of 8,269 children under six had been exposed to nicotine between January 2012 and April 2017.

It’s clear that these warning letters are just the latest in the ongoing attempt to crack down on the marketing of vaping products across the industry.

In fact, this press release comes just days after the manufacturer JUUL was required by the FDA to provide information on their popular JUUL vaping product.

As just part of this request, JUUL was asked to provide information relating to the product marketing and “appeal or addictive nature for youth”.

The basis of this request would seem to be increasing reports of the JUUL Pod sweeping across American Schools and gaining popularity among the teenage market. The request also cited “research studies that have raised concerns” and “social media evidence of youth use”. JUUL have been given a deadline of 19 June 2018 to provide the information.

In this instance, the 13 companies in receipt of a warning letter have been given a total of 15 working days to respond. The response must provide “actions taken to address each agency’s concerns”. Failure to respond or correct violations will result in further action, potentially injunction or seizure.

As a final warning to the vaping industry, Scott Gottlieb stated “Today’s announcement should send a clear signal that companies selling these products have a responsibility to insure they aren’t putting children in harm’s way or enticing youth use”.

What are your thoughts on the latest? Whilst it’s clear that manufacturers shouldn’t specifically market e-liquid products for children, isn’t it up to the parents to keep these things out of reach? How were the children able to get into the product contents? Every bottle of e-liquid I’ve ever bought had a lid with a child lock… Do you think it’s right that the FDA target e-liquid marketing?