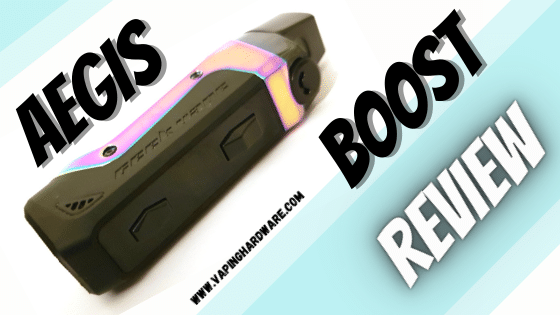 The Aegis Boost is the first pod mod we’ve reviewed from GeekVape. After hearing so many positive reviews, we thought it was time to put the Aegis Boost to the test and see what all the fuss was about!

The Aegis Boost features fully adjustable airflow control, adjusted via the wheel on the front of the device and a 0.45in OLED display. The refillable pod has a capacity of 3.7ml (2ml TPD version) and accepts both MTL and DTL push fit coils.

If that wasn’t enough, the Aegis Boost even supports a rebuildable (RBA) pod so you can build your own coils! I couldn’t resist buying the Boost RBA pod to see how it performed and have included it in this review.

I spent months putting the Aegis Boost to the test and it met (and exceeded!) all my expectations in terms of performance, durability and design. It’s easily one of the best pod vape systems released in recent years!

First things first, the Aegis Boost is made of zinc-alloy, faux leather and silicon rubber. It’s quite bulky compared to the other pod vape systems I’ve used in the past, but it’s a really nice looking device and incredibly comfortable to hold!

GeekVape designed the Boost to be water proof, shock proof and dust proof, rated at IP67. It’s a really durable pod system, which is handy as I constantly drop my vape gear!

Powered via an internal 1500mAh battery and controlled via an advanced AS chip set, the Boost has a small 0.45inch display showing battery status, wattage, resistance and a puff counter.

A side recessed USB charging port is located behind a silicone rubber flap, that once released, accepts the charging cable. On the battery section of the device there’s also a single up/down toggle button to adjust the power (wattage) and a firing button.

The color range is subtle – the Boost itself is mostly black, while the zinc-alloy strapping is available in 6 different colors. I opted for the multi-color option and it looks great. I feel like GeekVape have put a lot of thought and attention to detail into the design.

Overall I’m really impressed with the look and feel of the Aegis Boost. It’s tactile, well built and in keeping with the legendary Geek Vape style.

The Aegis Boost pods have a 3.7ml capacity (2ml TPD) and are smoked black in color. And this is actually one of the very few issues I have with the Aegis Boost… Because the pods are black, you can’t easily see how much e-juice you have left in the pod unless you hold it right up to the light.

The pod isn’t magnetic like a lot of other pods on the market, but held in place with the small rubber catch. I do have doubts about the longevity of this catch but time will tell…

The airflow on the pods is fully adjustable via the airflow control wheel. I love the fact GeekVape included this – it does a great job of altering the draw and temperature on any of the coils I used.

A filling flap (just above the airflow control wheel) lifts up to allow the pod to be filled with e-juice. I’ll show you how to fill the Aegis pods a bit further down!

The pods come with two removable drip-tips to suit different vaping styles – one round and one semi-oval (duckbill). These drip-tips are not 510 (so will only fit this pod) but nevertheless it’s still a nice touch. I did prefer the oval drip-tip but it does tend to spin round and not remain central to the pod.

The coils are push-fit and slot into the underside of the pod. They’re pretty secure and can be a little tricky to remove (especially if you have no fingernails) but GeekVape included a coil removal tool in the kit.

Unlike other pod RBA’s on the market, the Aegis Boost RBA is not a rebuildable coil – it’s actually an RBA deck built into a totally separate RBA pod. This is as close to an RTA (rebuildable tank atomizer) as you’re going to get with a pod system and I’m really impressed with the design.

When you purchase the RBA, it comes with the following:

The size and general design of the RBA pod is the same as the standard pod, even down to the airflow wheel. With a pod capacity of 2ml, the RBA pod is also filled and attached to the Aegis Boost in exactly the same way.

Unscrew the top section of the pod to reveal the two post, single coil deck. Building and wicking the deck is pretty straightforward and because the RBA is incorporated into a pod, dry burning the coil is simply carried out by pulsing (firing) the Boost.

GeekVape have done a fantastic job with the RBA pod and it really sets the Aegis Boost apart from the other pod vape systems I’ve used!

The Aegis Boost kit came with two coils included – a 0.6ohm for MTL and a 0.4ohm for DTL. The flavor from both coils was amazing for a relatively low wattage pod system and definitely better than I expected!

After filling the pod with my favorite juice (Thug Juice 50/50 at 3mg) – I set the wattage to 10w and adjusted the airflow to around half way. The draw was good but I had to fiddle with the airflow slightly before I found my ideal MTL draw.

The flavor was AMAZING and the vapor production spot on. I increased the wattage to the recommended minimum of 15w, but actually dialled it back down to around 12w, which seemed to be the sweet spot for me!

Really impressed with the MTL coil – an amazing vape experience from such a little device and at such low wattage. Loved it – a big thumbs up for GeekVape.

I used the same e-juice to get a direct comparison with the 0.4ohm coil and set the wattage to 15w, with the airflow fully open.

At wide open airflow, the draw was too airy for me personally. I closed the airflow until I hit my preferred DTL draw – I have to say the airflow control is brilliant, the adjustment range is so wide it caters for any style of vaping.

I tend to vape at a lower wattage range, and at 15w the flavor and vapor was muted and weak.

I cranked the wattage up to the recommended minimum of 25w and the flavor and vapor burst through – AMAZING on both counts!

Both the 0.6ohm N80 Fused Clapton coil and 1.3ohm Kanthal coil provide excellent flavor with really decent cloud production. MTL and DTL vaping styles are possible with both coils by adjusting the airflow.

Overall, I was really impressed with the performance from the RBA pod. It’s also super easy to build on thanks to the fact the RBA deck is housed in a separate pod!

It’s hands down the best RBA pod I’ve tried so far in terms of flavor and vapor production!

The Aegis Boost comes with an internal 1500mAh battery, more than enough power for a pod with a maximum output of 40w. Battery life depends on vaping style and the selected wattage, but I was getting around 7 – 8 hours of vaping before I needed to re-charge.

I tend to vape heavily (chain vaping) but usually within a low – medium wattage range. The battery life I’ve been getting was roughly what I expected but obviously increasing the wattage will reduce battery life.

It’s also worth noting that the Aegis Boost has a ‘pass through’ feature so you can charge and vape at the same time. It’s also really easy to charge and I’ll show you how in just a minute.

How to use the Aegis Boost?

Turning the Boost on and off:
Using the Aegis Boost is pretty straight-forward. To turn on/off, press the firing button 5 times in quick succession. When turning on, the display will light up showing you the current wattage, battery status and coil resistance.

Power Adjustment:
Adjusting the wattage is done via the up/down toggle button. The wattage is adjusted in 0.5w increments between 5w – 40w.  Once you reach either the max or min limit, it will continue cycling. Holding the button down for longer than 1 second will alter the rate of adjustment from 0.5w to 1w increments.

How to fill Aegis Boost pods?

Filling of the Aegis Boost pod is done by releasing the silicone rubber flap located just behind the airflow control dial. The filling hole is recessed so I recommend tilting the pod to the side before filling. This makes it slightly easier to get the tip of your e-juice bottle into the recessed hole.

The e-juice level is visible but only in certain light because of the smoked blacked casing.

Once filled the pod, just re-insert the silicone rubber flap and you’re good to go!

If you’re filling the pod for the first time, or you’ve just inserted a new coil, always prime the coil with a drop or two of e-juice before you put the coil in. Also be sure to leave the pod to sit for 10 minutes to allow the e-juice to fully saturate the wick before you fire it.

How to charge the Aegis Boost?

To charge the Aegis Boost you’ll need to use the Micro USB charging cable included with the kit. On the right-hand side, there’s a little raised silicon rubber flap. Once this flap is opened, you have access to the recessed charging port. The flap is a pretty tight fit to stop water ingress and is attached via a tiny rubber strap so it doesn’t get lost.

Once connected, simply plug the other end into a power outlet and the Boost will start charging. The small OLED display will show the battery symbol to indicate it’s charging.

The internal charging circuit is 5V/1.5A so it will take approximately 1 hour to fully charge.

Once completed, disconnect the USB lead and re-fit the little silicon rubber bung to maintain the IP67 rating.

At the time of writing, expect to pay at least £20 in the UK and $30 in the US – a fantastic price considering the quality and performance!

Replacement pods and coils are also reasonably priced but I highly recommend getting your hands on the Aegis Boost RBA pod if you want to save money over the long term!

Check out the current deals via the links below!

I love the Aegis Boost – the build quality, performance and overall vape experience is outstanding. The flavor and vapor production really surprised me and I haven’t put it down since it arrived!

I like the Aegis Boost so much I’d be disappointed if I misplaced or damaged it. Yep you’ve guessed it… I’ve just ordered two more!