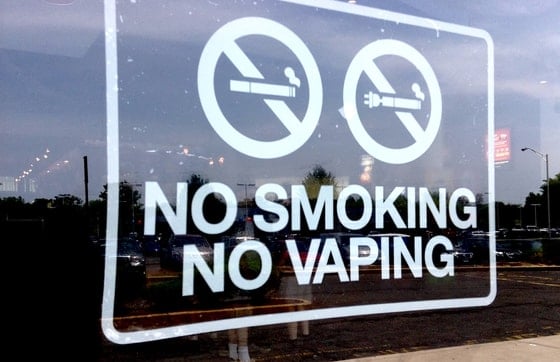 The advice follows the PHE’s latest independent review into the evidence surrounding e-cigarettes. This review suggests that patients should be allowed to purchase e-cigarette devices in hospitals. PHE explained this would encourage smokers to switch to vaping; a safer alternative.

The agency went one step further and said that hospitals should even provide vaping lounges. The report also highlights the need for Government officials to help manufactures licence e-cigarettes as medical quitting aids.

PHE’s recommendations would allow GPs to prescribe the devices to patients who are trying to quit smoking.

The review concluded that vaping poses only a small fraction of the risks of smoking.

The research also highlighted the benefit of providing e-cigarette devices and vaping areas in mental health hospitals. These patients are often on a long-term stay and usually display high levels of smoking related illness.

Martin Dockerell, tobacco control lead for PHE, said “We are saying no smoking anywhere on the grounds [of hospitals], no smoking in the smoking shelter – that shelter becomes a vaping shelter.

“There are two parts to being a smoke-free hospital. One is not allowing smoking on the premises, the other is helping every smoker to quit.

“Some hospitals will decide, especially with their longer-terms patients or patients who don’t have a choice whether they are there or not, where it will be appropriate to have spaces indoors.

“The strongest case for that is psychiatric hospitals because [these patients] have got the highest prevalence of smoking and the highest levels of smoking related harm.

He added: “There is no reason why a hospital shouldn’t designate some indoor areas where patients and visitors can vape.”

Experts suggested that the number of smokers who are replacing the habit with e-cigarettes could be around 20,000 a year.

They warned however that after a steep rise in the number of vapers, e-cigarette use has now plateaued. According to the report the total number of e-cigarette users in the UK now stands at just under 3 million.

PHE advised that the numbers could have slowed due to a lack of information concerning e-cigarettes. They suggested many smokers “incorrectly” believe that vaping is as harmful as smoking. Writing in The Lancet, PHE experts said: “Although not without risk, the overall risk of harm is estimated at less than 5% of that from smoking tobacco; the risk of cancer has been calculated to be less than 1%.”

In contrast, Professor John Newton, the director for health improvement at PHE, said: “Every minute someone is admitted to hospital from smoking, with around 79,000 deaths a year in England alone.”

Do you believe that hospital should sell e-cigarettes?

If officials followed the advice of PHE then surely the numbers of those dying from smoking related illness would fall. At the least the report from PHE highlights the growing concern from the vaping community that not enough is being done by the government to endorse vaping.

What do you think about PHE’s proposals? Get involved and leave us a comment below! Also feel free to hit the share buttons below: