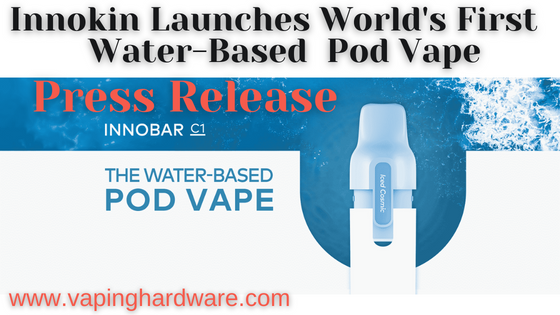 Innokin have been on a mission recently with the work they are doing with Aquios Labs on the technology around Water-Based vaping. We’ve seen a couple of Innokin devices released using this technology, mainly in the disposable market such as the Lota F600 and the Lota Enviro which we have previously reviewed.

Now Innokin are taking this one step further and have launched the world’s first water-based pod vape device, the Innobar C1. The beauty of this one is it’s NOT a disposable but utilizes a closed pod system with a re-usable rechargeable battery/body.

In our experience so far with these water-based e-liquids in the disposables we’ve reviewed, the performance, flavor and vapor was on par with a lot of other non water-based flavors in other devices we’ve come across. If the Innobar C1 performs equally as well then it IS definately a step in the right direction.

We’ve not had the chance yet to review this new device (the Innobar C1) but rest assured, it’s on its way to us so very soon we will be doing a detailed review on it.

Update 4th December 2022: True to form, Innokin sent us their Innobar C1 pod kit and all 10 of their pre-filled flavor pods to try. Having used them over the last few weeks, we published our findings in our review, the Innokin Innobar C1 Pod Kit Review.

Do take a look and see the what it’s all about. We were very impressed with the results.

This is a sponsored post written by Innokin and released as a Press Release article on the launch of the world’s first Water-Based Pod Vape, the Innobar C1. We at Vapinghardware are not liable for the accuracy and content of this article.

Vaping is a fast-growing, innovation-led industry where manufacturers compete for the latest edge to improve the consumer experience. Industry veterans Innokin are looking to create waves with their latest release, the Innobar C1, which is the first closed pod system to feature water-based vaping technology.

Water-based vaping technology is already recognized as a real step forward for the vaping industry, having recently won “Biggest Breakthrough Innovation” at the Golden Leaf Awards 2022 in Washington DC, after competing with the largest vaping brands in the world.

The Innobar C1 launches with 12 flavours and has been specifically created to mimic the size, weight, and simplicity of disposable systems. This makes the transition to an affordable and less wasteful vaping format easier for vapers who are currently using disposables. The inclusion of water-based vaping technology gives the Innobar C1 a key point of difference in the highly competitive and homogenized closed-system market.

Closed pod systems are pre-filled with e-liquid and are sold with a pre-charged battery. As soon as consumers open the packaging, a pre-filled pod vape is ready to be used. As a result, a closed pod system acts as a convenient entry point to vaping for transitioning smokers.

The Innobar C1’s efficient 450mAh battery is designed to last for a full day of use during each charge cycle when using 20mg/ml nicotine pods and the battery can be topped up in 30 minutes, providing better run time than disposable equivalents.

Pre-filled or “closed” pod systems are like disposable vapes, but instead of discarding the whole device after use, only the pod section of the device is thrown away when empty. This significantly reduces the cost of vaping. Typically, pre-filled pods are sold in multi-packs at a similar cost to a single disposable device, delivering greater value for money.

As soon as a pod is depleted, it can be replaced with a new pod, retaining much of the convenience factor of a disposable device.

The entirety of a disposable vape is discarded after use. This creates a significant environmental concern around disposable vaping devices. When using a pre-filled pod system, the battery section is recharged and used for a long period of time, massively reducing waste from the battery and other materials which make up the body of the device.

It’s very refreshing to hear that a company as influential as Innokin are talking about the pitfalls and impact of disposable devices on the environment. We have seen a great surge over the last couple of years with so many new companies producing nothing but disposables.

While I understand there is a market for them, sadly we are seeing the demise of the once great vaping industry in terms of really great mods and tanks. The strange thing is, the performance of these mods and tanks, and I include pod devices in this, are so much better and so much more versatile, not to mention so much cheaper in the long run.

Well done Innokin for continuing to produce really great vape kits as well as implementing this new water-based technology in a reusable device. As Innokin have already mentioned, it’s far cheaper and kinder to the environment in only replacing the closed-system pod rather than the whole device.

I can’t wait to review the Innobar C1 water-based pod vape. Hopefully Innokin out the kindness of their hearts send us each of the 12 different flavor pods to sample so we can write a summary against each of the flavors. Do keep an eye out for our review which we will hopefully be publishing in the next few weeks.

Update 4 December 2022: We reviewed the Innobar C1 Pod Kit and recommend taking a look at the review. We put it to the test and tried all 10 of their flavors and were very impressed with the results. In our opinion, for several reasons, the Innobar C1 being a “closed pod system” has less of an impact on the environment and your pocket.

Thank you for reading, we hope you enjoyed this news item and found it helpful. If you have any questions or feedback, please feel free to leave us a comment below.