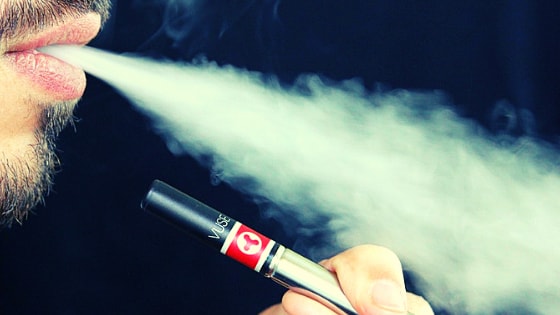 We all know cigarettes are bad for you and vaping is significantly better for your health. BUT the burning question… Is vaping addictive?

If you’ve finally kicked your addiction to cigarettes and started vaping, you might be left wondering if you’ve just replaced one addiction for another…

The short answer is yes, vaping is addictive. In fact, any product containing nicotine is likely to be highly addictive. Nicotine use releases adrenaline and dopamine, causing a ‘rush’ and feelings of euphoria and contentment.

It’s the release of these chemicals that becomes habit forming, reinforcing a dependency on nicotine. You’re also likely to experience withdrawal symptoms if you suddenly reduce your body’s supply of nicotine.

Thankfully, recent studies suggest that vaping (whether addictive or not) is far less harmful than smoking…

IS IT JUST THE NICOTINE THAT MAKES E-JUICE ADDICTIVE?

Nicotine is a highly addictive substance but there are other factors to consider.

Vaping has become something of a hobby for me, which I’m sure many other vapers can relate to.

Whether it’s the thrill of buying the latest mod, experimenting with different flavor recipes or building more advanced (and crazier!) coil builds, vaping has become something far more than just a smoking cessation tool…

That’s not to say this is a bad thing.

But you’re far more likely to vape longer term if it’s something that becomes a lifestyle or hobby rather than just a way for you to get your nicotine ‘fix’.

With vaping ‘festivals’ and cafés springing up across the country, endless vape memes on social media and YouTube vaping videos with millions of views, it’s clear that vaping has also entered into ‘pop culture’ territory.

This in itself doesn’t mean that you’ll become addicted to vaping but it’s another factor to consider. The social relevance of any product can be a powerful lure.

Finally, all you former smokers will know this next feeling all too well…

What the hell do you do with your hands when you quit smoking?! And how much do you just miss the act of inhaling and exhaling the cigarette smoke, regardless of the nicotine buzz you get…

Vaping is no different and you’re just as likely to become addicted psychologically to the physical act of vaping regardless of the nicotine.

IS VAPING AS ADDICTIVE AS SMOKING…

This is the real question. We know vaping is less harmful but is vaping as addictive as smoking? And the answer is it depends…

If we totally forget the liquid nicotine in e-juice then I’m going to upset a bunch of you and state that vaping could be even more addictive than smoking. Purely for the reasons I listed above. I smoked for years and never saw it as anything other than a nasty habit!

Never once did I get excited about trying a new brand of cigarettes or getting tickets for a smoking festival (is there even such a thing?!)… I love vaping and I think I would struggle to give it up. Far more than I struggled when I quit smoking!

In terms of the psychological aspects, the act of inhaling and exhaling the vapor, as well as feeling ‘naked’ without a vape mod in your hand, is very similar to the experience of smoking.

If we look at the social aspect it could be argued that vaping is becoming more acceptable by societal (and certainly government!) standards…

Again this could play a slightly distant but long term role in whether vaping is more addictive than smoking.

If something is socially acceptable, you’re likely to do it more often and increase the chances of it becoming habit forming.

By far the biggest factor in terms of whether vaping is more or less addictive than smoking is the chemical breakdown and ingredients;

Usually made with as little as four main ingredients; 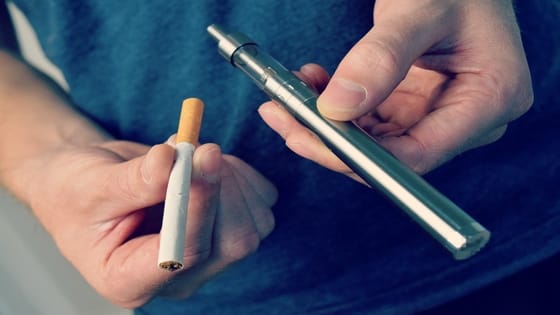 So it’s not hard to see that cigarettes are chemically more addictive than vaping.

On a personal note, I could completely relate to this even before doing the research for this post.

As a smoker I would panic if I ran out of cigarettes or got caught on a plane for longer than a couple of hours.

And yet although I’ve often got a vape mod not far from reach, I could comfortably go all day without vaping if I want or need to.

And let’s be honest…

I don’t know about you but even if vaping was more addictive than smoking, the fact that a cigarette contains 7000 chemicals is enough to guarantee I won’t ever reach for a cigarette again!

HOW TO AVOID BECOMING ADDICTED TO VAPING?

So you’ve seen enough now to know that vaping is likely to be less addictive than smoking and definitely less harmful.

HOW TO REDUCE THE NICOTINE IN YOUR E-JUICE?

Your best option if you want to reduce the nicotine in your e-juice is to start slowly.

Most vendors will offer e-juice in set increments, for example 3mg, 6mg or 12mg and higher.

If this is the case, try dropping one set level and give yourself a few days to let your body adjust to the new nicotine ‘dose’.

If you find the reduction in nicotine to be too drastic, I have a little trick for you…

If you want a more precise (and cheaper!) option, it might be time to learn how to mix your own vape juice…

NICOTINE WITHDRAWAL AND WHAT TO EXPECT?

Although it’s definitely worth reducing the nicotine in your e-juice, be aware that you’re likely to experience nicotine withdrawal symptoms.

Especially if you reduce the nicotine strength too drastically or cut it out altogether!

Watch out for these common withdrawal symptoms;

Just sick with it and you’ll be glad you did!

And that’s it ladies and gents! When somebody asks you “is vaping addictive” in future you can tell them it is BUT it’s less addictive AND healthier than smoking! Please share this with a fellow vaper or a smoker looking to quit!