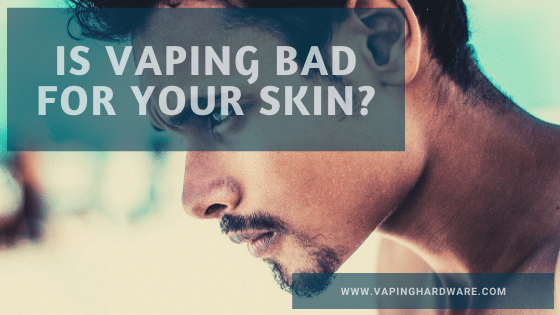 Is vaping bad for your skin? Does vaping age your skin? Could vaping actually cause skin problems? These are just some of the questions we get asked about vaping and skin health…

The short answer is yes… Vaping could negatively affect your skin in several ways. Although more research is needed, the evidence suggests that vaping could cause you to experience dry skin, accelerated ageing and even slower wound healing!

BUT… it’s not all bad news!

There are things you can do to reduce some of these vaping side effects and we’ll cover these in detail a bit later. Including one unusual tip you’ve probably not tried before…

And that’s not the only thing to consider… In my recent post about vaping and oral health, I highlighted the fact that most of us are vaping as a replacement for traditional cigarettes.

Considering that, we need to look at whether vaping is a better alternative for skin health. I think it’s fair to say we can probably guarantee that vaping isn’t good for your skin. But if it’s better for your skin health when compared to smoking, surely this is another positive on the table for vaping?…

With that said, let’s take a look at exactly what vaping does to your skin, what the studies tell us and how you can reduce the risk of skin problems while vaping!

WHAT DOES VAPING DO TO SKIN?

Although more studies are needed, it’s believed that vaping is likely to affect your skin in several ways;

Dry skin is probably the most common side effect and could lead to itching, flaking or even a noticeable rash.

This is because the ingredients in your e-liquid, specifically Propylene Glycol (PG), are hygroscopic. The definition of which is ‘a substance tending to absorb moisture’.

This is something I experienced personally when I first started vaping. Not just extremely dry, but also red and irritated skin that wouldn’t budge regardless of how much cream I lathered on my face! To be honest, it was a nightmare and I very nearly quit vaping altogether…

I knew that vaping was likely to have a dehydrating effect based on the research I’d done before switching from smoking to vaping.

However, my problem wasn’t purely dehydration. I discovered later that I actually had PG intolerance! Switching to 100% VG e-liquid solved the problem and I haven’t looked back since.

Although the research here is limited, vaping could also contribute to increased eczema, dermatitis and acne symptoms.

This study in 2018 found that e-liquid often contains certain nanoparticles, specifically copper, chromium, tin and nickel. These nanoparticles are absorbed into the bloodstream and have been found to reduce antioxidants in the body. Antioxidants are important (among other things…) for maintaining healthy skin.

In addition to this, that same study found that common flavoring chemicals used in e-liquid could contribute to increased oxidative stress, a reduction of antioxidants in the body and clogging of skin pores.

These findings, combined with the dehydrating effects of vaping, all suggest vaping could exacerbate certain existing conditions.

Dermatitis, psoriasis and eczema sufferers in particular could experience an increase in symptoms as a result of vaping.

Let me know in the comments below if you suffer from any skin condition and what affect, if any, vaping has on your symptoms.

Evidence suggests that vaping could also cause accelerated ageing. Again, more research in this area is needed but it’s generally accepted that the primary culprit is the nicotine in your e-liquid.

Nicotine is known to reduce the flow of blood, nutrients and oxygen to your skin. Without adequate blood flow and essential nutrients, you’re more susceptible to sagging, loose skin and wrinkles.

However, even if you vape without nicotine, let’s look at what we know so far. We’ve covered the dehydrating effects of vaping. We know vaping flavored e-juice could increase oxidative stress and clog skin pores. Based on this, I think it’s probably fair to say that vaping without nicotine is also likely to accelerate ageing.

This recent study found that vaping could also increase tissue death, leading to a reduced healing rate for skin wounds. Although slower wound healing has been well documented as a result of smoking, researches have now identified that vaping is comparable to using traditional cigarettes.

All joking aside, doctors actually advise patients to quit smoking for several months prior to any major surgery. I wouldn’t be surprised if this becomes standard practice at some point for doctors dealing with patients who vape.

WHAT DO THE STUDIES TELL US ABOUT VAPING AND SKIN HEALTH?

Studies investigating the impact of vaping on skin health are fairly limited. I’ve already cited two studies that link vaping and poor skin health.  I also found this 2004 study, which was conducted to investigate the effects of nicotine on skin health.

Researchers stated the effects of nicotine on skin health were unclear, although they conclude the affects appear more negative than positive. They go on to state that the evidence suggests nicotine negatively impacts skin ageing, wound healing and dermatological diseases.

A more recent study in 2017 again linked vaping to slower wound healing in skin. The study tested the skin of over fifty rats exposed to both cigarette smoke and e-cigarette vapor. The researchers concluded that skin necrosis and hypoxia (oxygen deprivation) were comparable in both smoke and vapor.

The available studies all seem to confirm that vaping could contribute to poor skin health, premature ageing and slower wound healing.

But there’s one thing we still need to figure out…

IS VAPING BETTER FOR SKIN THAN SMOKING?

Almost all public health experts in the UK agree that vaping is significantly safer than smoking.

We know that most of the risks associated with smoking (including skin problems) are linked to the toxins released by burning tobacco. These toxins cause free radical damage and deplete essential nutrients and minerals within the body.

We also know traditional cigarettes produce approximately 7000 chemicals when burned, many of which are harmful!

With decades of research and data, we can say with certainty that smoking is terrible for your skin and overall health.

But is vaping better for your skin?…

Although the available data shows that vaping isn’t good for your skin, further studies are needed to confirm whether vaping is a healthier alternative.

If we look at what we know about vaping so far, it seems likely to me that vaping is the ‘lesser of two evils’.

Not just because e-cigarette liquid contains far fewer chemicals than a cigarette. But also because nicotine is a potential risk factor in terms of skin health and we can control the amount of nicotine we consume when vaping. Specifically by choosing a nicotine strength no higher than we need to satisfy cravings!

HOW TO PROTECT YOUR SKIN WHILE VAPING?

Until we know more about exactly how vaping impacts your skin, it’s worth taking a few precautions to at least reduce the risk of unwanted side effects.

Aim for at least 3 litres of water a day, every day. Taking in as much water as possible will keep your skin hydrated while vaping. It also helps to flush toxins out of the body, which your skin will thank you for!

Take care of your skin

Keep your face clean and free from dirt, oil and grease. I would also recommend this moisturising cream on Amazon; it has a soothing effect on irritated skin and works wonders for dry patches!

Reduce the nicotine in your e-juice

Nicotine is considered one of the primary causes of skin problems while vaping. Anything that reduces the flow of blood, nutrients and oxygen is going to be bad for your general health and skin.

Reduce the risk by keeping the nicotine level in your e-liquid as low as possible while still getting that nicotine ‘fix’ you need.

Oil pulling is the process of ‘swishing’ edible oil in your mouth every morning on an empty stomach for 10-20 minutes… It’s an ancient Ayurvedic practice believed to detoxify the body and eliminate toxins, both of which are great for skin health!

Take a look at this guide to oil pulling for more info.

That about wraps it up folks! So is vaping bad for your skin? Yes, probably. Is vaping worse for your skin than smoking? We don’t know… Yet. Let’s just hope that further studies shed some light on this topic in the near future.

I hope you found this post helpful. If you’ve experienced skin problems while vaping, or you just want to leave me some feedback, please feel free to leave a comment below!