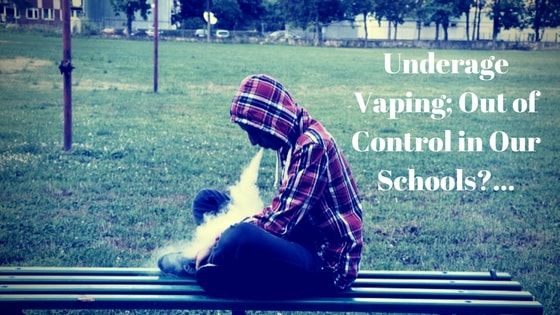 For those of you who don’t know, the JUUL is a small, discrete vaping device released in 2015 as a healthier alternative to traditional analogue cigarettes. Created by two graduate students at Stanford, the JUUL device currently represents a significant portion of all e-cigarette sales in the U.S, with no sign of slowing down! Unfortunately, the JUUL seems to be gaining immense popularity in schools across the U.S, with some even referring to it as a JUUL epidemic.

With widespread reports of students vaping in class, YouTube videos of underage students using the JUUL and the explosion of ‘Juuling’ on social media, it’s clear the trend is sweeping schools nationwide.

A study by the U.S Surgeon General in 2016, confirmed a 900% increase in e-cigarette use by high school students from 2011 to 2015. A further study was conducted (the National Youth Tobacco Survey) and the results indicated that 1.7 million students had used e-cigarettes within the previous 30 day period!

A news post by CNN reported that Milagros Vascones-Gatski, a substance abuse counsellor at Yorktown High School in Arlington, had never seen a tobacco product become so popular so quickly. She went on to report that three to four students are caught smoking e-cigs on campus each week, usually JUULs, and some are suspended.

Resembling a USB drive, the JUUL vaping device is sleek and discrete, easily concealed in the palm of your hand.  The JUUL device has also been reported to produce less vapour than other devices, making it even easier to conceal its use in a classroom. Even more concerning when considering it’s popularity with underage users; each JUUL cartridge provides as much nicotine as en entire pack of cigarettes.

Education officials across the U.S are becoming increasingly concerned with the prospect of a JUUL epidemic, with certain schools even resorting to police intervention. The rise of teen vaping has also sparked concern among parents and federal health authorities, such as the U.S Food and Drug Administration (FDA).

Scott Gottlieb, the FDA Commissioner stated that “protecting our nation’s youth from the dangers of tobacco products is among the most important responsibilities of the U.S Food and Drug Administration and it’s an obligation I take personally”.

A statement released by Gottlieb on 24 April made it clear that the FDA will disrupt “youth access to and use of tobacco products”. Essentially, the statement outlined a number of measures taken by the FDA to prevent children getting addicted to any form of nicotine delivery system. The statement mentions JUUL by name, stating “we’re announcing that the FDA has been conducting a large-scale, undercover nationwide blitz to crack down on the sale of e-cigarettes – specifically JUUL products – to minors”.

The report also goes on to state that the FDA will hold retailers accountable, with Gottlieb commenting… “Let me be clear to retailers. This blitz, and resulting actions, should serve as notice that we will not tolerate the sale of any tobacco products to youth”.

JUUL has until 19 July to provide the FDA with the information required. In the meantime, JUUL have responded announcing plans to invest $30 million to combat underage use of vaping products. JUUL have also stated they fully support the proposed increase to the minimum age requirement to purchase e-cigarettes.

What are your thoughts? Do we need to be concerned about a JUUL epidemic? Although it seems JUUL products have become incredibly popular with high school students, surely this has nothing to do with JUUL Labs and wasn’t their intention? Obviously underage vaping should be monitored and prevented. However, to me it seems like ‘overkill’ for the FDA to throw their full weight at JUUL Labs.