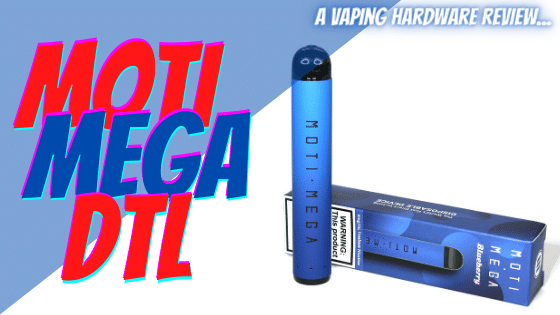 The MOTI Mega disposable pod is the latest release from the guys over at MOTI and the first direct-to-lung (DTL) disposable in the World!

The Mega is a draw-activated pod vape with a 650 mAh battery. Much higher than your typical disposable. It’s a pre-filled/closed system pod with a choice of 7 mouth-watering flavors. Holding an impressive 3.5ml of e-juice the MOTI Mega is rated for 800+ puffs! Certainly enough to last a medium – heavy vaper 1 – 2 days.

Available in either 3mg freebase nicotine or 10mg nicotine salts, the pod is fitted with a 1.0ohm coil that kicks out a maximum of 10.2 watts. Designed for DTL vaping, the MOTI Mega is all about blowing thick tasty clouds.

Just like its cousin the Piin Plus, the Mega is similar in size to a good old fashioned Cuban cigar. It’s chunkier than other disposables I’ve tried but still lightweight and super comfortable to hold.

It also features an internal LED that lights up when you puff and flashes three times when the battery is finished. A nice touch and not something you see very often with disposable vapes.

Quick Note: The guys over at MOTI were kind enough to send us a handful of flavors to try for the purposes of this MOTI Mega review. A big thank you to MOTI but as always, we’ll be putting the Mega through it’s paces and giving you our honest review.

No bells and whistles here…just the MOTI Mega housed in a plastic case to keep it in place. The mouthpiece on the pod is covered with a soft silicone cap. Simply remove the cap and you’re ready to go!

Just like other MOTI products, the packaging is stylish and eye-catching. Almost everything you need to know about the MOTI Mega is printed on the cardboard box including flavor, nicotine level and specifications.

There’s also a QR code on the back that let’s you verify the authenticity of the pod. The only info missing is the PG/VG ratio of the e-juice. While not vital, those with a PG intolerance are left in the dark.

The design of the MOTI Mega itself is outstanding. While slightly bigger than your average disposable, the Mega still feels incredibly lightweight and sleek. Just like previous MOTI disposables it’s coated in a soft silicone that just feels nice to hold.

Even when I didn’t need to vape I found myself picking it up to play with (there’s a joke in there somewhere…).

Each of the seven flavors come in their own vivid gradient color scheme. The orange soda for example is a funky mix of bright orange and yellow. Like something out of a psychedelic lava lamp, it makes a nice change from the black and gun metal you usually see in the vape world.

Printed on the side of the pod in bold, black typeface are the words ‘MOTI MEGA’ and running around the bottom of the pod are a series of small pin-sized air holes.

At the top end of the device is the black plastic mouthpiece that’s contoured perfectly to allow for a heavy DTL vape. If you’ve tried other disposables from MOTI you’ll notice the mouthpiece on the Mega is slightly thicker.

It’s a nice touch and shows MOTI have really made an effort to set the Mega apart as the perfect disposable for DTL vaping. On the base of the Mega is a small black cover that houses extra air holes and the blue LED that lights up when you draw.

The numerous air holes on the MOTI Mega make for an excellent DTL inhale. Not so airy that you feel like you’re getting nothing but just enough to allow for a long deep draw.

Overall, I’m really impressed with the design and build quality of the MOTI Mega. The subtle differences between the Mega and the Piin are effective and the build quality makes you wish you could re-charge it for a second round!

In terms of vapor production, the MOTI Mega is easily the best disposable I’ve ever tried. When you exhale the thick foggy clouds you almost forget you’re vaping a disposable. I haven’t tried another disposable that even comes close to the vapor production on the Mega.

Flavor production is another big win for the Mega. I’m struggling again to think of another disposable pod that matches the Mega on this front. I actually preferred the flavors on the MOTI Mega to those in the Piin and Piin Plus models.

Maybe the biggest win of all is the battery life and e-juice capacity on the MOTI Mega. Packing a 650 mAh battery with 3.5ml of e-juice, the Mega far outstrips most of the competition.

I found each disposable lasted me around a day of heavy vaping, sometimes more. The Mega lasts for around 800+ puffs which is far more than most disposables. If you’re a light – medium user each MOTI Mega should last you 2 – 3 days.

There weren’t actually many drawbacks I could find with the Mega. The sensor on the draw activation could use a little fine tuning but it wasn’t a major issue. I occasionally took a draw where the pod failed to fire but it didn’t happen often enough to be a major concern. I also noticed that near the end of each pod I got the occasional dry hit or burnt taste.

While the draw on the Mega is great for DTL vaping, those who are used to a MTL vape might have to work a little harder than usual. Quite a heavy inhale is needed to activate the sensor but I did find covering the air holes slightly was a great way to reduce the draw needed.

Other than these minor issues the MOTI Mega performed far better than I could have imagined. For a DTL vaping experience the Mega really does tick all the right boxes!

I was lucky enough to try 6 of the flavors (3mg). While vape flavors are pretty subjective I’ll run through my thoughts on the ones I sampled:

For me the flavors on the Mega were the best of all the MOTI disposables. Because the Mega is designed for DTL vaping, MOTI have toned down the icy additive they used in the Piin and Piin Plus flavors. While these were still great, the icy additive sometimes made it hard to vape all day.

The only flavor I didn’t get to sample was the kiwi. But, if the strawberry kiwi is anything to go by you won’t be disappointed!

If you read our original review of the MOTI Piin you’ll notice that one of the only drawbacks for us was the price. While still markedly cheaper than smoking, the cost far exceeded that of a refillable pod.

However, just like the markup on the MOTI Piin Plus, the cost of the Mega is far more reasonable. At the time of writing you can pick yourself up a single disposable for $5.99 from VapeSourcing.

Considering each disposable pod comes with a 650 mAh battery and 3.5ml of e-juice this price is an absolute steal! With a medium amount of use you can easily squeeze 2 days out of each Mega… Far cheaper than smoking.

Unfortunately I couldn’t locate any vendors in the UK or US that currently supply the MOTI Mega so you may have to wait some time to receive them. However, the Mega is a brand new product so expect it in stores near you soon.

Overall I really can’t think of a disposable I’ve tried that’s better. MOTI have taken a tried and tested design with the original Piin and made it even better.

The vapor and flavor production are the best I’ve seen on a disposable and the impressive battery and e-juice capacity make the MOTI Mega a great cost effective alternative to smoking.

If you’re a fan of DTL vaping then the Mega seriously won’t disappoint! If you have any questions, or you’ve tried the MOTI Mega and want to tell us what you think, we’d love to hear from you in the comments below!