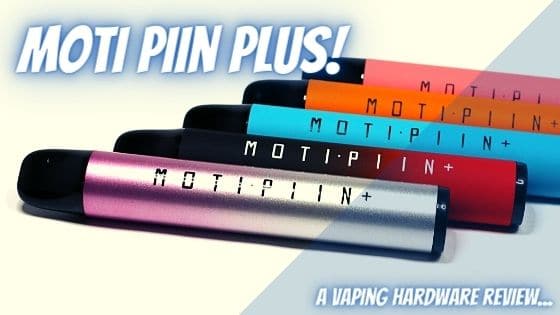 MOTI were kind enough to send us a handful of flavors to try for the purposes of this MOTI PIIN Plus review – a big thank you to MOTI. BUT as always, we’ll be putting the PIIN Plus through its paces and giving you an honest review.

The PIIN Plus disposable pod is a draw activated, pre-filled/closed pod system with plenty of flavors to choose from. Much larger than the original, the PIIN Plus is similar in shape and size to a good old fashioned cuban cigar. Despite this extra size, it’s still fairly lightweight – and super comfortable to hold.

The PIIN Plus has an internal 670mAh non re-chargeable battery and e-juice capacity of 4ml – both of which are a HUGE upgrade over the original!

Available in either 2% or 5% nicotine salts, the PIIN Plus is rocking a 1.6ohm coil and lasts around 1000 puffs. If you’re a light – medium vaper, you could get 2-3 days of vaping before you run out of juice/battery.

Just like the original, the PIIN Plus is a disposable vape, which means you just puff until it’s empty of e-juice/battery and throw it away.

Also like the original, the bottom of the PIIN Plus has an internal LED that lights up when you inhale. It also flashes three times when you’ve run out of battery, a nice little feature.

But enough of me waffling, let’s get stuck into the full MOTI PIIN Plus review!

The MOTI PIIN Plus packaging is simple – a cardboard sleeve, with a plastic casing holding the PIIN Plus in place. The mouthpiece of the pod is covered in a soft silicone – just remove the pod from the plastic casing, take off the silicone mouthpiece cap and you’re ready to vape!

Let’s start with the packaging…

Much like the original PIIN, the PIIN Plus packaging is small, sleek and attractive. Almost everything you need to know is printed on the box – flavor, approximate puffs, e-juice capacity and nicotine strength are all clearly visible.

My only complaint with the MOTI PIIN Plus packaging… The PG/VG ratio isn’t listed. We noted this in our review of the original PIIN and it’s disappointing to see the ratio and/or ingredients still aren’t listed. Although this is only a minor issue, for those suffering from PG Intolerance it would be nice to have this information printed on the packaging.

The design and build quality of the MOTI PIIN Plus itself is outstanding – the size, shape and plastic coating make the PIIN Plus lightweight and super comfortable to hold. So much so that I found myself fiddling with it even when I wasn’t vaping!

Each flavor of the PIIN Plus is a different color and every one I tried looked great – sleek and aesthetically pleasing. On the side of the device, in slim black font, is the inscription ‘MOTI PIIN +’.

My only gripe is the fact the first flavor I tried was the Peach Ice which is a bright pink color… The flavor was great (more on this later) but I did feel a little silly vaping a bright pink disposable pod in public!

At the top of the PIIN Plus is a small black, plastic mouthpiece. The mouthpiece is smooth and comfortable and the airflow is nice and tight – a perfect MTL draw.

The bottom of the disposable houses the blue LEDs which light up when you draw on the mouthpiece.

Overall, I’m really impressed with the design and build quality of the MOTI PIIN Plus. It looks great, it’s comfortable to hold and it’s still compact enough to carry easily in a pocket.

In terms of performance, I had high hopes after reviewing the original MOTI PIIN earlier this year.

The MOTI PIIN Plus brings back everything I loved about the original, while upgrading in almost every way. It feels like MOTI really paid attention to the feedback from the vaping community and they’ve made some huge improvements.

Much like the original, the PIIN Plus has a nice restrictive MTL draw with a decent throat hit – perfect if you’re trying to kick a smoking habit. If DTL is more your cup of tea, MOTI also recently released the MOTI Mega – a 650mAh 1ohm disposable which we’ll be reviewing soon!

The flavor and vapor production on the PIIN Plus is also spot on, just like the earlier PIIN. Both devices pack a real punch, especially in terms of flavor!

The increase in battery life and e-juice capacity gives you around 1000 puffs before the PIIN Plus runs out of gas – I got just over a full day of heavy vaping before I had to throw each disposable away. If you’re a light -medium vaper, you could easily get between 2-3 days of vaping!

My only slight complaint – as the MOTI PIIN Plus starts to run out of juice, you’ll notice the flavor drops off… In an ideal world, the battery and e-juice would run out at roughly the same time. But I found I was getting occasional dry hits in the last few hours before the battery died.

I could be wrong, but it also feels like MOTI improved the sensitivity of the draw activated inhale compared to the original PIIN. Every once in a while I’d puff on the original and get nothing, no flavor or vapor. And yet I didn’t have this problem with the PIIN Plus!

Overall I’m really impressed with the MOTI PIIN Plus. The flavor and vapor production is excellent, the battery life is amazing and the 2% nicotine strength was spot on for me.

My only other gripe is that the ice range of flavors were a little overpowering. It’s not a major issue and just my personal preference, but the ice range was a little too much for me!

The MOTI PIIN Plus comes in 12 different flavors and although I haven’t tried them all, I’ll briefly run through those that MOTI sent me…

Overall, the flavors MOTI sent me were great – out of the five I tried, the only one I wouldn’t buy again was the Mango Lychee. In an ideal world the icy kick would be a little less pronounced on some of the other flavors, but otherwise they were spot on!

You can also get the MOTI PIIN Plus in the following flavors:

When the original PIIN was first released, the price was one of the only things that put me off buying replacements when the pods MOTI sent me ran out. Compared to the cost of vaping with a standard box mod for example, the original MOTI PIIN was just too expensive.

However, it looks like the price of the original has come down drastically since then… Even so, I was only getting about half a day of heavy vaping out of the original and the cost quickly mounts up!

As for the MOTI PIIN Plus, at the time of writing you can get hold of a single disposable for $7.99 from VapeSourcing – a pretty decent price considering you could squeeze at least two days out of each one!

Unfortunately, I couldn’t locate a single vendor in the UK that supplies the MOTI PIIN Plus. However, it’s a brand new product so this is likely to change in the near future!

If the MOTI PIIN Plus is priced in a similar bracket in the UK, this is pretty decent compared to smoking and is likely to save you money in the long term. I was a 30 a day smoker years back and it was expensive enough back then – I dread to think what that would cost me now!

Overall I’m really impressed with the MOTI PIIN Plus! A big thumbs up to MOTI for the improvements they’ve made over the original PIIN!

The flavor and vapor production is excellent, battery life (for a disposable!) is outstanding and the price is better than I was expecting!

As a super convenient, cost effective alternative to smoking with heaps of flavor, the MOTI PIIN Plus is easily the best disposable vape I’ve tried this year!

If you have any questions, or you’ve tried the MOTI PIIN Plus and want to tell us what you think, we’d love to hear from you in the comments below!