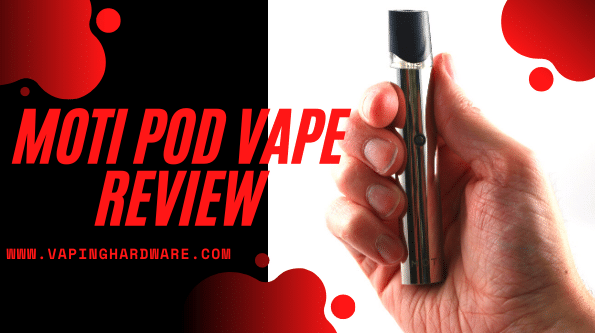 With the MOTI being the first pod style vape that I’ve reviewed I couldn’t wait to get my hands on it! After winning a competition on Planet of the Vapes, the good guys over at MOTI sent me this device and I’ve loved putting it through it’s paces!

The MOTI is a super portable pod system that comes in a variety of eye-catching colours. It takes both open refillable pods and closed pre-filled pods and features a 500 mAh draw-activated battery. The pods themselves hold a respectable 1.8ml of e-liquid and the coils inside are rated from 1.2 – 1.5 ohms.

Both kinds of pod slot into the device in the same way and are held in place with two magnets. With no firing button and certainly no variable wattage buttons the MOTI is as simple as they come. The device is draw activated and a small LED light in the center of the MOTI illuminates when puffing. The LED light also serves as a charging indicator and flashes 3 times in quick succession when the device needs a recharge.

The MOTI is the first pod system that I’ve personally owned and I must admit, I was a little skeptical of it’s ability. Did the MOTI do enough to convince me otherwise?

What’s in the Box?

The MOTI is an extremely sleek and stylish vape! The ergonomic design makes for a comfortable hold and I was really impressed with just how light the mod is (only 24g!). With an oval shape (think flattened vape pen), the device won’t be rolling off your desk anytime soon.

Measuring only 115mm x 20mm x 10mm the MOTI suits a vaper looking for something stealthy and discreet. I was sent the silver colour (pictured above) but this pod vape comes in a choice of 10 different colours (yellow, red, teal, white, black, blue, aurora, warm grey, silver and pink).

The LED light on the front is a nice addition and illuminates when using the device. It’ll blink three times in quick succession when it’s due a recharge. It’s not overly bright though and is easily covered for anyone looking to vape under the radar!

One of the biggest selling factors of the MOTI is the ability to use both an open refillable pod and a closed pre-filled pod. Too many of these new pod vapes limit you to only using the closed (and often expensive) pre-filled pods!

The pods are contoured and fit nicely between the lips. They’re held in place via two magnetic strips on the bottom of the insert-able pod. Both the open and closed pods fit nicely and I couldn’t feel any rattle on the mouthpiece when vaping. That being said, the pods aren’t held in place super tight and dropping the device is likely to see them popping out.

Both options hold a respectable 1.8ml of e-juice and the open pods are easily refilled. Simply remove the mouthpiece from the pod and pop out the black rubber plug at the top. This’ll leave you with two small holes that allow you to refill the pod. Just make sure you don’t squeeze your juice into the center hole!

The guys who make the MOTI report that the pre-filled pods should last you around 800 puffs. They also claim that the open pods will be good for around 8 refills before needing to switch to a new one. To give credit where it’s due, I’ve refilled 12 times now and still haven’t noticed any drop off in flavor or vapor quality.

If I’m being honest I didn’t hold out high hopes for the MOTI going into this review. Despite that, I have to say I was pleasantly surprised and even a little impressed by it’s performance. The flavor quality was much better than expected. When trying pod vapes of this class in the past the flavor has been fairly muted. The MOTI however exceeded my expectations on this front!

It gives a very tight and satisfying MTL (mouth to lung) vape and closely mimics the inhale on a cigarette. Personally I prefer a DTL (direct to lung) vape so it took me a little while to get used to the draw on the MOTI. It’s a testament to the MOTI that I started to really enjoy the MTL experience. It reminded me of the draw on the Innokin iClear 16s clearomizer; perfect for someone making the switch from cigarettes to vaping!

The closed pre-filled pod came with a tobacco flavor that was far more enjoyable than other tobacco flavors I’ve tried in the past. Currently there are a choice of eight different flavors (watermelon ice, lemon tea, menthol, mango ice, tobacco and mung bean).

After working my way through the closed pod I scoured the internet for some replacements. Unfortunately, choices were limited and I only found a handful of stores stocking the MOTI and its pods. Your best choice is probably to pick the device and pods up from the MOTI website or Amazon.

I picked up a 4 pack of open refillable pods and started off with a 70VG/30PG juice at 3mg strength. The pod was easy enough to fill up (though a small bottle tip is needed), but the flavor and throat hit were a little disappointing. I let the juice saturate the wick for around 20 minutes and while I didn’t get any dry hits or burnt taste, the overall experience wasn’t a great one.

The wick within the pod didn’t seem to saturate as well as hoped and I found myself taking hits without firing the device to try and wet the wick. If you need to do this, a finger placed under the pod air holes and a drag on the mouthpiece will do the job. Just be careful not to drag on the mouthpiece too much or you risk flooding the coil.

Next up I switched the juice to a 50/50 PG/VG mix (6mg) and the MOTI refillable pod fared much better! The device provided decent flavor, a reasonably good throat hit and a fair amount of vapor. I also ran a a 20mg ‘Nic Salts’ juice through the pod and noticed a marked increase in throat hit.

With the inbuilt battery only clocking in at 500 mAh I was again a little skeptical of how the MOTI would fare. I’m certainly guilty of ‘chain vaping’ and typically find myself replacing vape batteries several times a day. That being said, the MOTI again surprised me!

With regular use the MOTI battery was lasting me around 5 hours! It’s simple to charge and only took around an hour to reach full capacity. The LED light will show when it’s on charge and goes out when the vape is fully powered.

While the MOTI battery lasts for a reasonable time you are of course limited by the internal battery. Personally, I’ve always liked the ability to switch out my batteries when they’re empty. If I’m heading out for the day its nice to know I’m covered. That being said, you do of course have the option of powering the MOTI from any USB outlet or a power bank. Given it only takes an hour for a full charge you won’t be too restricted.

At the time of writing the MOTI is very reasonably priced on both sides of the pond! There didn’t seem to be many online stores stocking the device or the pods but what I did find I’ve laid out below:

Overall, for what you get the price of the MOTI is great. It’s a sleek and stylish device that looks and feels like it’s worth a lot more!

Overall, I was really impressed with the MOTI and found my entry into the world of pods wasn’t in vain. Admittedly I didn’t have high expectations at the offset, but the MOTI really surprised me!

The device would suit a smoker trying to quit or a vaper looking for a discreet and stylish stealth device. Despite having well over 100 mods of various shapes and sizes, I keep finding myself searching out the MOTI.

We hope you enjoyed our review and we’d love to hear your thoughts on the MOTI Pod. Feel free to share this review using the buttons below!