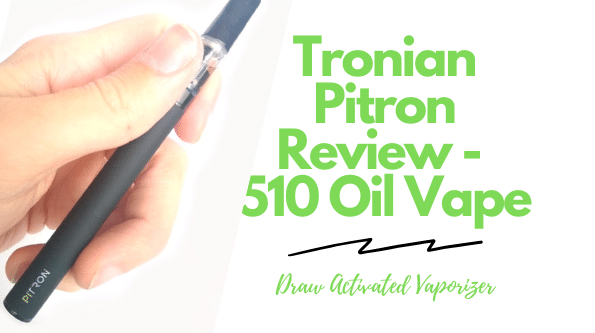 The Tronian Pitron offers vapers an easy and convenient way to enjoy oils on the go. Compatible with oil cartridges 10.5mm plus, the Pitron is a sleek and stylish pen vape with plenty to offer.

Featuring an impressive 350 mAh battery and micro USB charging, it’s the perfect device for taking with you on the go. It’s also draw activated with a good amount of stealth to boot. All of this and more for the incredibly reasonable price of $9.99.

I’m already a big fan of the Tronian range having previously reviewed the Tronian Nutron and the Tronian Tautron. These were both great vapes with budget friendly price tags and a host of super handy features. All of the Tronian vaporizers are made by the guys over at TVape who have an excellent history of producing well built quality vaporizers at an affordable price.

Read on to find out how I got on with the Pitron, the latest offering in the Tronian range…

Quick Note: The guys over at TVape.com were kind enough to send us the Tronian Pitron for the purposes of this review. A big thank you to TVape but as always, we’ll be putting the vape through its paces and giving you an honest review.

What’s In The Box?

The Pitron comes packaged in a small and discreet box with some handy information about the battery printed on the back. Inside the box you’ll find the following:

With a sleek cylindrical shape, the Pitron is considerably smaller than most other 510 batteries on the market. Measuring only 80mm tall and a mere 10mm in width, the Pitron fits comfortably in the palm of the hand and blends in nicely.

It’s an extremely portable device and perfect for taking with you on the go. It’s easily stashed in a pocket or purse and the smooth rubberized finish ensures protection from stray keys and coins.

I actually preferred the small LED indicator on the Pitron to the more obvious LEDs on the Tronian Nutron. While I thought the LEDs on the Nutron looked great, they did take away from the overall stealth factor. On the flip side, the light on the Pitron is subtle and doesn’t draw attention; much more convenient for super stealthy sessions.

The micro USB charging port located on the bottom of the battery is also a much welcomed change over the design of the Nutron. While you were forced to unscrew the cartridge in order to charge the Nutron, the Pitron’s micro USB charging port on the opposite end of the battery is much more convenient. It also makes it easier for charging the Pitron on the go with an external battery pack!

There’s also a noticeable lack of buttons on the Pitron, with the vaporizer being fired via draw activation. While draw activation on some batteries can be problematic, the Pitron performs incredibly well. The draw activation is extremely responsive and you only need a small gentle inhale to fire the battery. There was also a complete lack of any misfires (inhales with no activation).

Overall I was really impressed with the design and features on the Pitron. It’s an incredibly cheap vaporizer with the look and feel of a much more expensive device. I loved the smooth rubberized finish and the size and draw activation make this an easy and enjoyable vape to use for your oils. The only slight drawback to the design of the Pitron is the exposed cartridge, however this is pretty typical of most 510 oil vaporizers.

In keeping with the other vaporizers in the Tronian range, the Pitron is incredibly easy to use and super user friendly. I unboxed the Pitron and had it assembled and ready to vape under a minute later.

You simply attach your chosen 510 oil cartridge and you’re good to go. Because it’s a draw activated vaporizer there’s no buttons or functions to fuss around with and you switch the battery on simply by inhaling on the mouthpiece of your cartridge.

The only thing you do have to consider is that the battery will only work with a draw activated compatible cartridge. Most oil cartridges are compatible with draw activated devices but if you want to make sure you’ll need to check your cartridge has a small opening or groove at the bottom of the thread to allow for the airflow. The battery on the Pitron has a small sensor that detects when the user draws on the mouthpiece and activates the much needed voltage going to the cartridge.

Unfortunately the Pitron doesn’t come with variable voltage like its counterpart; the Tronian Nutron. What it does have however is ‘superior calibration’. This means it’s designed and tested with a multitude of different viscosity oils in mind. The battery is also calibrated to work best when using alongside the heating element of the Tronpods.

I tried several different oils through a range of cartridges and found the Pitron consistently delivered smooth and satisfying hits. It did perform at its best when used with the matching Tronpods. Despite not having variable voltage I found the Pitron delivers powerful hits with a decent amount of vapor.

As with any 510 vaporizer it’s also worth remembering that as the battery depletes you’ll get less of a hit. If you want the most power from the Pitron be sure to keep it well charged.

Considering it’s minuscule size, the Pitron has a surprisingly large battery capacity, clocking in at a very respectable 350 mAh. It’s easily one of the smallest vaporizers I’ve used for vaping oils but it holds a much higher than average capacity. When compared with the Tronian Nautron, the Pitron has an extra 120 mAh of battery life!

If you compare it with the more expensive and larger Tronian Tautron, it only holds a mere 30 mAh less in battery capacity. I found with regular and generous hits I was able to get a full days worth of vaping from the Pitron, ideal if you want a small and discreet vaporizer to take out with you for the whole day. If you also consider it only costs $9.99, that’s insane value for money.

When the battery does run dry you simply plug in the included micro USB cable to a suitable outlet. The LED indicator next to the charging port will light up to let you know the device is recharging. When the LED goes out the device is fully charged. All told this takes around half hour, an extremely quick charge time and super convenient.

Another big positive is the included capability for pass-through vaping. This means even when you’ve got it on charge you can take a hit as and when needed. The only slight drawback for me is the lack of display to indicate remaining battery life. Even a change in the color of the LED as the battery nears empty would have been useful. Considering again the insanely low cost of the Pitron though, the battery more than holds its own.

On the stealth front the Pitron performs incredibly well. It’s easily stashed in a pocket or bag and the sleek professional design will have people thinking it’s just a standard e-cigarette pen. It’s dinky size means you can vape it on the go with most of the device being concealed in the hand.

One of the things I love about the whole Tronian range is how discreet they are. Of all the vaporizers I’ve tried in my time, the Pitron is easily one of the most stealthy! I was more than happy to take it out and about with me and it drew absolutely no funny looks. To the uninitiated the Pitron looks just like your typical 510 pen battery with a clearomizer on top.

The cost of the Pitron is a mere $9.99! Considering the fantastic performance and the user-friendly design this budget friendly price is insanely generous!

Replacement parts and the matching Tronpod cartridges are also really budget friendly. The 1.0ml Tronpod will only set you back $7.49, with the 0.5ml cartridge costing only $5.99. I found the Tronpods worked a treat and were more than worth their asking price.

The insanely low price makes the Pitron an ideal device for complete beginners looking to dip their toes in the water. With an excellent battery capacity, fantastic hits and the convenience of pass-through vaping I’d also recommend it for veteran oil users.

If you are interested in picking yourself up a Tronian Pitron be sure to take a look at the links below. TVape manufacture the Tronian line of vaporizers and they offer fantastic customer service.

Overall I had a great time testing and using the Tronian Pitron. The super generous price tag and the awesome battery capacity make this an obvious purchase. The draw activation works brilliantly and the ease of use makes this perfect for complete beginners looking to try out an oil vaporizer for the first time.

It delivers great hits almost on par with the Tronian Nutron, with the added benefits of a much larger battery capacity and draw activation. The tiny size of the Pitron and convenient micro USB charging also make this the obvious choice for an on-the-go vaporizer.

And that’s it folks! I hope you enjoyed the review and if you’ve got any thoughts feel free to leave a comment below…