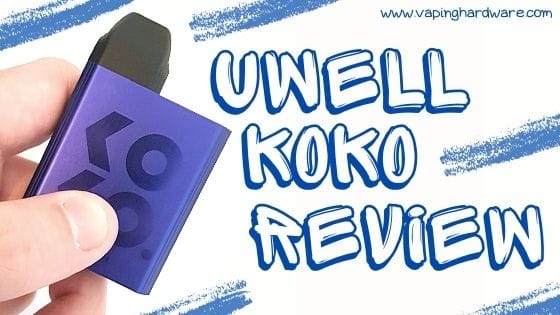 The UWELL Caliburn KOKO is the latest pod vape released by the Chinese based company Shenzhen UWELL Technology. The KOKO is a follow-up to the hugely popular Caliburn pod released in 2019 – often touted as the #1 pod vape system on the market to date!

I have nothing but good things to say about UWELL – I reviewed the original Caliburn earlier this year and was so impressed I included it in our pick of the best pod vape systems money can buy.

As a huge fan of the original, I couldn’t wait to review the KOKO and find out what improvements UWELL had made!

In a nutshell, the Caliburn KOKO is a draw activated MTL pod vape, with refillable 1.2ohm pods and a 520mAh battery. The original 1.4ohm Caliburn pods are also compatible with the KOKO, and both the 1.2ohm and 1.4ohm pods have a 2ml e-juice capacity.

The Caliburn KOKO is one of the smallest pod vape systems I’ve reviewed, weighing in at only 33g, with size dimensions of 67mm x 43mm x 12mm. It’s extremely lightweight and compact, yet surprisingly still feels solid and well built.

A quick shout out to VapeSourcing – they sent us the kit for the purposes of this Caliburn KOKO review. A big thank you – but as always I’ll be putting the KOKO to the test and giving you an honest review.

There isn’t usually much to say here… BUT the kit comes with a neck chain that you can connect to the device so you can carry it around your neck! To be honest it’s probably not something I’ll use but I thought this was a really nice touch and not something I’ve seen included with a pod vape before!

Straight out of the box I was impressed with the design and build quality of the Caliburn KOKO. It’s sleek, compact and lightweight – a small, square shaped pod vape with dimensions of 67mm x 43mm x 12mm, including the 1.2ohm pod!

Despite the smaller size, the KOKO feels slightly more robust than the original Caliburn. It’s also slightly heavier – 33g with the pod attached.

The Caliburn KOKO logo is printed on both sides of the battery section, while the USB charging port and battery vents are on the bottom of the device.

On the side of the KOKO is a small LED battery life indicator (bottom hole) and one airflow hole. The battery indicator lights up when you draw on the mouthpiece and also flashes while charging – red, blue or green to display remaining battery life.

The pods fit comfortably into the top of the KOKO and are held in place with two small magnets. Just be sure to give the pod a little extra push to make sure it’s fully connected to the spring loaded contact points. I’ll show you how to replace and fill the pods further down.

On the opposite top side corner of the KOKO is a small loop to attach the chain. I didn’t use this much – mainly because I didn’t have the KOKO out of my hand long enough to hang it around my neck… But it’s definitely handy if you’re prone to losing your vape!

On either side, where the pod attaches to the battery section, are clear ‘window’ slots which allow you to see how much e-juice is left in the pod. This is the same design as the original Caliburn and it’s super handy – you don’t need to remove the pod to check your e-juice level!

Running along either side are ‘ridges’ or engraved lines, identical to the design of the original Caliburn. Nothing fancy, but it gives the KOKO a nice finish and provides a little extra grip.

Overall I’m really impressed with the design and build quality of the Caliburn KOKO. It’s compact, easy to use and super comfortable to hold!

The KOKO kit comes with two 1.2ohm pods – one installed and one spare. The pods are almost identical in design to the original Caliburn pods – clear durable plastic with a removable plastic mouthpiece and a 2ml e-juice capacity.

The pods are refillable and disposable, so you just throw away the whole pod (mouthpiece included) when your coil/wick burn out.

UWELL designed the KOKO to be compatible with the original Caliburn pods which is a really nice touch. I had a bunch of Caliburn pods lying around so I was able to try both the 1.4ohm and 1.2ohm pods in the KOKO – they fit perfectly and work like a charm.

The pods are really easy to fill – you just remove the black plastic mouthpiece and insert your e-juice bottle into one of the fill ports.

The pods slot easily into the top of the KOKO and are held in place by two small magnets on the underside of the pod.

As with the original Caliburn, the magnets do a good job of keeping the pod secure but you’ll need to give the pod a firm press until it clicks into place otherwise the draw activation won’t work.

I loved the original Caliburn pods and the KOKO is no different. The pods are well designed, durable and easy to use.

My only gripe is the fact that the mouthpiece can be a little fiddly to remove on both pods the first few times you re-fill. Other than that, a big thumbs up to UWELL for sticking with a design that not only works, but works well!

If you like the original Caliburn, you’ll love the KOKO. It’s more of a re-design than an upgrade – with the same battery capacity and pod design – but the new 1.2ohm pods deliver noticeably better flavor and vapor.

Vapor production is also spot on – you won’t be winning any cloud chasing competitions but the KOKO ramps up instantly and kicks out a really decent amount of thick, warm vapor.

I was initially surprised UWELL didn’t include a firing button on the KOKO – especially as the dual firing on the original Caliburn was so popular. However, the draw activation is flawless, ramping up instantly each time I took a hit.

In terms of airflow, the draw on the KOKO is a fairly loose MTL. It’s not so loose you can’t get a decent draw, but it’s certainly not tight. Also keep in mind the airflow isn’t adjustable, so if you do like a really tight MTL draw the KOKO might not be for you.

Both 1.2ohm pods that came with the KOKO kit worked perfectly – no spitting, leaking or gurgling. The flavor and vapor production was spot on and I got around 2-3 weeks out of each pod before it had to be replaced.

The original 1.4ohm Caliburn pods also work perfectly on the KOKO. Again, no issues with leaking or performance and you can expect to get around 2-3 weeks of heavy vaping before they burn out.

So what’s the difference between the two pod types?…

Well for me personally, the flavor produced by the 1.2ohm pod is noticeably better. Which really surprised me considering the flavor from the original Caliburn pods was already amazing!

The vapor produced by the 1.2ohm pod is also thicker and warmer compared to the original 1.4ohm.

The only downside to the 1.2ohm pods for me was the airflow… The original 1.4ohm pods were already a fairly loose MTL draw, and the 1.4ohm pod is even looser. It’s not a major issue and the KOKO is still a MTL pod vape. But if you prefer a tighter draw, you’ll definitely want to use the 1.4ohm pods.

The Caliburn KOKO has a maximum output of 11w, powered by a 520mAh capacity battery. This is the same battery capacity as the original Caliburn, and to be honest I think UWELL missed a great opportunity here…

Don’t get me wrong… The KOKO is a fantastic pod vape and it’s really hard to find a fault. If mine broke tomorrow, I’d order a replacement the same day. BUT it could have been the perfect all-round pod system with a slightly larger battery capacity.

It’s not so much an issue if you’re a fairly casual vaper. But if you vape heavily you’re only going to get around half a day before you need to re-charge.

On a positive note though, it only takes around 30-40 minutes for a full charge. And you’ll know when the battery needs re-charging thanks to the LED battery life indicator which lights up while you’re charging or taking a puff:

As with the original Caliburn, the vapor output reduces as the battery life gets lower. I recommend keeping in the blue light range or above if you want the best possible performance!

How do I change the KOKO pods?

Replacing the KOKO pods is super easy – just remove the used pod and insert a fresh one!

Obviously you’ll need to fill the new pod with e-juice and I’ll show you how to do this a bit further down. But otherwise it’s as simple as that!

When you’ve inserted the new pod, make sure you give it a firm press until it clicks in to place. The magnets that hold the pod in place work well – but if the pod isn’t fully connected, the draw activated sensor won’t work properly.

You’ll also need to leave the KOKO sitting for a couple of minutes before you take a draw on a new pod. This gives the wick enough time to saturate fully and prevents the risk of a dry hit.

How do I fill the UWELL KOKO pods?

To fill the KOKO pod with e-juice, you need to remove the black plastic mouthpiece at the top of the pod. It’s a pretty snug fit so you’ll need to give it a good tug, especially the first few times you re-fill.

When you’ve removed the mouthpiece, you’ll see three holes at the top of the clear plastic pod – don’t fill through the middle hole, this is the airflow.

On the side of the pod is a minimum and maximum fill line. Just pop the tip of your e-juice bottle through the left or right hole and fill to the maximum line.

When you’ve filled the pod with e-juice, pop the black mouthpiece back onto the top of the pod and give it a firm press.

Just remember to give it a few minutes before you take a hit so the wick has time to saturate properly.

How to charge the UWELL KOKO

The battery LED indicator will flash while the KOKO is charging – red, blue and green depending on the battery level. When it’s fully charged, the LED will stop flashing and stay green.

Not a bad price for what you get…

Replacement pods (both 1.2ohm and 1.4ohm) are also pretty cheap – especially over the long term when you consider each pod lasted me between 2-3 weeks!

There’s plenty to like about the UWELL Caliburn KOKO. The flavor and vapor is spot on, it’s easy to use and really comfortable to hold.

If you’re a flavor chaser and don’t mind a fairly loose MTL draw, the KOKO is definitely the pod system for you!

I was a little disappointed that UWELL didn’t increase the battery capacity. And it’s arguable whether it’s worth buying the KOKO if you already own the original Caliburn…

But overall, the KOKO is a great pod system and definitely one I’d buy again!