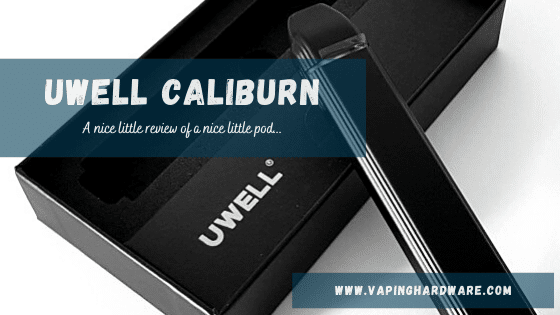 With the enormous rise in popularity of the UWELL Caliburn in recent months, I thought it was finally time to see what all the fuss was about.

I’d been ‘test driving’ the MOTI Pod for about 2 months and found myself genuinely surprised by how much I enjoyed vaping it!

The MOTI was the first pod device I’d ever owned and after hearing such great things about the UWELL Caliburn, I was eager to see how well it compared.

The first pod system released by UWELL, the Caliburn features a dual firing system, refillable 1.4ohm pods with 2ml e-juice capacity and a respectable 520mAh battery. Charged via USB, the 520mAh battery provides up to 11w of power.

Slightly larger than some of the other pods on the market but plenty small (and light!) enough to fit in a shirt pocket.

So without further ado, let’s get stuck into the full review!

The UWELL Caliburn appears to have been designed with two things in mind; simplicity and ease of use. Just fill up your pod and vape, no nonsense. And this is a huge selling point for UWELL. No mess, no fuss. Just fill up and vape.

Yet while the Caliburn is basic in design, the build quality is unmistakable. I’ve seen reviews suggesting it feels cheap and flimsy, but fortunately that hasn’t been my experience at all.

I’m ashamed to say I’ve dropped mine several times and yet it’s still working perfectly. The Caliburn is relatively lightweight, at around 30g with the pod attached, yet it feels sturdy and reliable.

On either side, where the pod attaches to the battery, are small ‘windows’. These allow you to see how much e-juice is left in your pod, another handy little feature. It’s these design features that really contribute to the overall ease of use and popularity of the Caliburn.

Running along either side of the device are ‘ridges’ or engraved lines. These add little but cosmetic value to the device, other than perhaps providing extra grip.

You won’t find anything else on the device aside from ‘UWELL’ and ‘Caliburn’. Just in case you forget what you’re vaping…

A pod vape system, regardless of how well designed or aesthetically pleasing, is essentially just a battery. The pod is where the magic happens, as they say…

The kit I ordered came with two Caliburn pods, one installed and one spare. Just like the battery/body of the device, the build quality of the pods is impressive.

Made from clear durable plastic, the Caliburn pods are refillable and disposable, so you re-use them until the coil and/or wick burn out.

The pod is designed to hold a decent 2ml of e-juice, which you fill from the top of the pod after removing the black plastic mouthpiece.

Inside the base of the pod are stainless steel parallel coils and organic cotton. As far as I can tell, this parallel coil design is pretty rare for a pod system.

Which could explain why I found the flavor and vapor production so impressive, but more on that later…

The pod has two air holes on either side of the base, designed to circulate air up through the coil. Again, the focus here appears to be on flavor.

On the underside of the pod are magnets to hold it in place when it’s connected to the battery.

Although the magnets do a good job of keeping the pod secure, you’ll need to give the pod a firm press until it clicks into place.

Ok, this is what you’ve been waiting for…

If I was impressed with the design of the UWELL Caliburn, I was blown away by the performance. I’ll break it down as best I can.

Airflow/draw isn’t too airy, but it’s not too tight either. The airflow isn’t adjustable, so if you like a super restrictive MTL draw the Caliburn might not be your cup of tea. BUT, and I know this is subjective, for me the airflow is spot on. Just the right balance – a decent draw without feeling like your trying to suck wet cement through a straw…

The flavor production is great, far better than I was expecting . And not only is it great, but it lasts! I’ve been vaping the Caliburn pod I’m using right now for roughly 3 weeks. Yes, 3 weeks and the flavor is STILL amazing.

Vapor production and quality is also far better than I was expecting. The coil heats up the instant you take a draw (or press the button) and kicks out a really decent amount of warm vapor.

I also love the dual firing system on the Caliburn! I tend to use the auto draw rather than the button and this works flawlessly. No delay, no puffing like mad to try and get a hit.

One minor thing I did notice though – if the pod isn’t clicked firmly into place, the draw activated sensor doesn’t work. Not a major issue; just make sure you press the pod firmly into place. You’ll hear a click and you’re good to go!

Were there ANY issues?…

The only minor issue I had with the Caliburn was throat hit. I really like a decent throat hit, almost sharp. And the Caliburn is smooth. Not so smooth you don’t feel like you’re inhaling anything, but smoother than I like.

I’ve managed to improve the throat hit I get by increasing the nicotine strength of the e-juice I’m vaping. I noticed 10mg/ml was far too low for me and I had to increase to 20mg/ml.

Flavors also make a big difference; anything menthol or fruity provide a better throat hit and they really made a difference for me.

Overall, it was a fairly minor issue that I was able to solve by being a bit more selective with the e-juice I was vaping. But it might be something you want to keep in mind if, like me, you prefer a stronger throat hit.

I’ve been through about six pods at the time of writing. Two that came with the Caliburn, and a pack I bought separately.

The pod that came installed with the kit gurgled and spat, leaking juice into my mouth every few hits. NOT a good experience. In fact, if I’d written this review then, it would be very different! I swapped the pod out with the spare that came with the kit and it worked perfectly. No spitting, leaking or gurgling.

Every pod I’ve used since that first has been perfect.

The flavor and vapor production are fantastic and consistent. The pods are easy to fill (I’ll show you how below) and seem to last forever. I generally get around 3-4 weeks from each Caliburn pod, and I vape pretty heavily. I wouldn’t class myself as a chain vaper, but probably not far off!

The flavor and vapor production do noticeably drop off in the last week though, which is my cue to swap out the pod.

I haven’t had a dry hit. Not even once. I’m sure it helps that I always keep my pod filled to at least 25% capacity, but this really impressed me.

One minor issue with the Caliburn pods though. The mouthpiece/drip-tip is very hard to get off the first few times you re-fill the pod. After that it loosens up and comes off easily, but you really have to tug at it the first few times.

The Caliburn only kicks out 11w and is powered by a 520mAh capacity battery. Depending on how you vape, you can easily get around half a day of vaping on a full charge.

Another thing I really like about the Caliburn is the fact it only takes around 40 minutes for a full charge. And you’ll know when your battery needs re-charging as UWELL included a LED battery indicator. The LED will light up when you’re charging the Caliburn or taking a puff;

One thing I did notice though; the vapor output is noticeably reduced as the battery life gets lower. I recommend keeping in the blue light range or above if you want the best possible performance…

How do I change the UWELL Caliburn pod?

Installing a new Caliburn pod is really straightforward. Just remove the existing pod from the device and insert a fresh one…

Obviously you’ll want to make sure you’ve filled the new pod with e-juice. We’ll cover that in just a second, but other than that you’re good to go!

You do need to push the pod into the Caliburn until you hear a faint click. As I mentioned before, if the pod isn’t fully attached to the Caliburn body, the draw activated sensor won’t work properly.

Also be sure to leave the Caliburn sitting for a few minutes before you take a hit on a new pod. This gives the wick enough time to saturate properly and prevents the risk of a dry hit.

How do I fill the UWELL Caliburn pod?

To fill a new Caliburn pod with e-juice, you just remove the black plastic mouthpiece/drip tip.

You’ll see three holes at the top of the pod. DO NOT use the hole in the middle, this is the airflow.

Insert the tip of your e-juice bottle into one of the other two holes and fill the pod until your e-juice is between the minimum and maximum fill lines.

Place the black plastic mouthpiece/drip tip back into place and give it a firm press to make sure it’s secure.

Now you’re all filled and ready to go. If this is the first time you’re filling the pod, just make sure to wait a few minutes before you take a puff so the wick can fully saturate.

How do I charge the UWELL Caliburn?

The LED light will flash red, blue and green as the battery charges. When the Caliburn is fully charged, the LED will stop flashing and stay green.

The Caliburn will set you back anything from about £18 – £30. Not a bad price all things considered. Obviously if you want a kit including e-juice or spare pods, you’re looking at the higher end of that price bracket.

I bought my Caliburn from Amazon UK for £19.80 with free delivery. No ‘free’ e-juice but the kit I bought did come with a spare pod. Super handy if, like mine, the pod that comes installed is a dud.

I’m sure you can tell by now, I love the UWELL Caliburn. We’ve got a room FULL of vaping gear and I’ve used nothing but the Caliburn since it arrived.

In fact I was so impressed with the Caliburn I had to include it in our round up of the best pod vape systems of 2020!

Amazing flavor. Great vapor production. Fantastic coil/pod life. The list goes on and on… UWELL really nailed it with the Caliburn and it’s easy to see why it’s become so popular.

In an ideal world, the battery would last just a little longer and the throat hit would be a bit stronger. But to be honest, these are minor issues considering how much I enjoy vaping the Caliburn.

Overall, the Caliburn is a fantastic pod system and I highly recommend it!