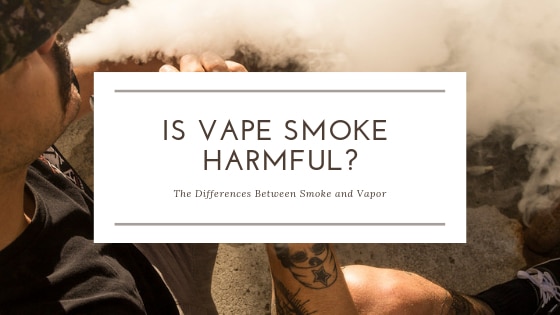 Vape smoke… If you’re a vaper reading this then chances are the very term ‘vape smoke’ riles you up. And chances are you’ve also been asked at least one of these grating questions at some stage…

If you haven’t been asked one of these questions then you’re probably the one doing the asking! Personally, I get it…. if you spend a lot of time around someone vaping it’s only natural to wonder if those clouds drifting across your line of sight are doing any harm!

But rest assured we’re here to clear up some of the confusion. We’ll be answering the questions above and drilling down into the key differences between vapor and smoke.

Dispelling the ‘Vape Smoke’ myth!
The differences between smoke and vapor…

Where a lot of confusion stems from is just how similar smoke and vapor look. If we aren’t cloud chasing (the act of blowing as big a vapor cloud as one can!) then it’s easy to mistake us vapers as your common garden variety smoker.

But despite the similarities in how smoke and vapor look they couldn’t be more different. What makes the two strikingly different is their chemical composition.

“the grey, black, or white mixture of gas and very small pieces of carbon that is produced when something burns.”

The key takeaway here is the word ‘burn’. When we set something on fire we cause the combustion of the original material; in this case tobacco. When we burn a material it alters the chemical composition of it drastically.

While cigarettes have approximately 600 ingredients in them, over 7,000 chemicals are produced when we burn one. Worryingly, over 70 of these chemicals are known to cause cancer and many more are categorized as poisonous!

The definition of vapor can get a little heavy on the science, especially when we consider the clouds leaving our vape are technically an aerosol. Wikipedia sums the two up pretty well:

“Vapor is a substance in the gas phase at a temperature lower than it’s critical temperature… An aerosol is a suspension of fine solid particles or liquid droplets, in air or another gas.”

When the ingredients in e juice are heated a gaseous vapor is formed with the ingredients being suspended in a fine liquid particle form. Unlike cigarette smoke we see no visible carbon present in vapor; precisely because no combustion occurred.

The e juice is heated to a temperature lower than it’s critical one. This means that no combustion takes place. The chemicals in the e juice aren’t drastically altered, only turned into an aerosol. Essentially, what you find in e juice is exactly what you find in the vapor produced by heating it.

A look at the chemicals in smoke and vapor

The term ‘Vape Smoke’ really gets blown out of the water when you consider just how different the chemical compositions of vapor and smoke are….

The chemicals in vapor

The 4 main ingredients found in e juice vapor are all approved by the FDA and BMA as safe for consumption. The food, cosmetics and pharmaceutical industries have all been using these ingredients for years without any reported issues:

What about the other chemicals in vapor?

Besides the main 4 chemicals found in vapor, studies suggest that tiny ultrafine particles of harmful chemicals are also present:

The chemicals in smoke

If I were to write about all of the chemicals in tobacco smoke you’d be faced with an encyclopedia on the subject. In this article I’ll stick to the worst offenders:

The above chemicals are just a handful of culprits in a list 7,000 strong! It stands to reason that the sheer number of chemicals in smoke compared to those in vapor make it a far more dangerous beast. 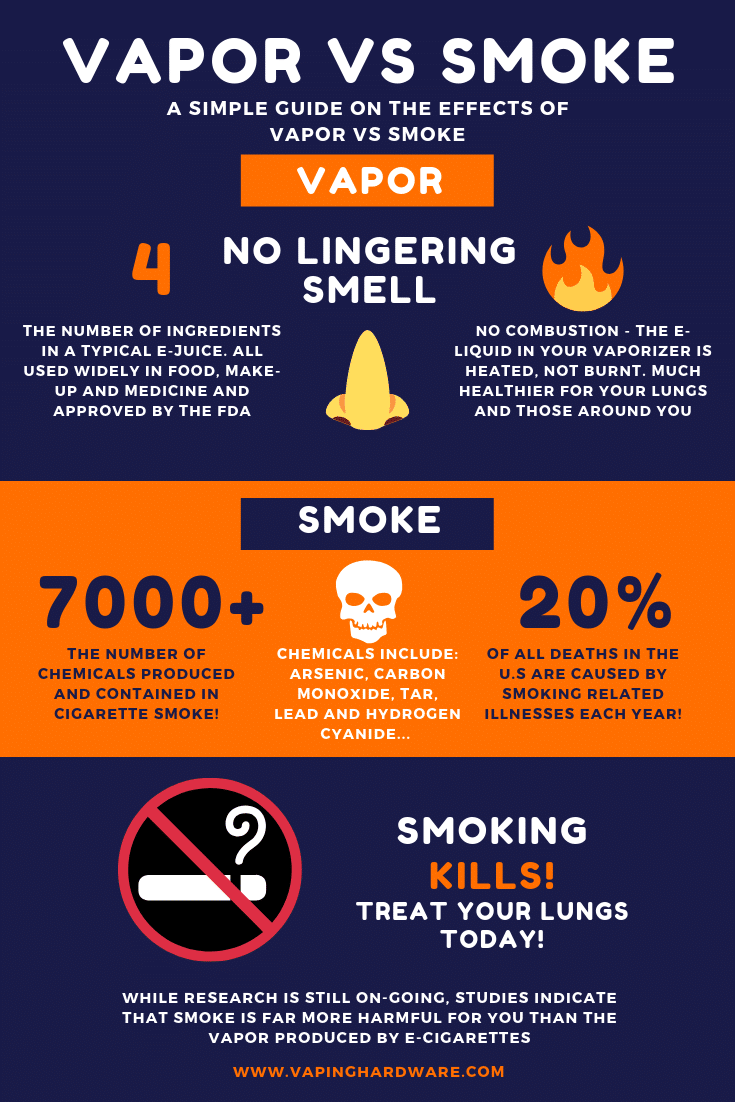 What about passive vaping? Is vapor harmful for those around us?

We all know that standing near a smoker and inhaling their second-hand smoke is harmful for us. Countless studies have shown the negative impact second-hand smoke can have. As well as this cigarettes release smoke whether they’re being drawn on or not. The advantage of e cigarettes is that they only emit a vapor when being used.

BUT, what about the chemicals in second-hand vapor…?

A further study in 2014 however suggested that the vapor produced by e cigarettes can still negatively impact indoor air quality. The researchers tested 9 vapers in a well ventilated room for 2 hours at a time. The results showed the indoor air quality dropped and contained higher levels of chemicals like nicotine, aluminium and particulate matter (chemicals that affect the respiratory system).

While a number of hardcore vapers are adamant that vaping should be allowed in public spaces it seems obvious that vapor is still harmful and does reduce the air quality around us.

While I’ve shown that the health risks associated with ‘vape smoke’ are considerably less than those associated with tobacco smoke, you might still have some reservations about vapor.

Does vapor stain clothes and furniture like cigarette smoke?

The short answer is no. The primary cause of staining from cigarettes is because of the tar found in tobacco smoke. Because there’s no tar present in vapor there’s no resinous material to cause the chemicals in vapor to stick or cling to surfaces.

While nicotine has been shown to cause some staining, the level’s found in second-hand vapor are so low that you would probably have to vape in the same spot in your house for years to cause even slight staining.

Will vaping in the house leave a nasty smell?

Because no combustion takes place when vaping, that strong smoky smell associated with cigarettes isn’t a problem. While you might have a problem with a particular flavor of e juice and the smell it gives off, the odor doesn’t stick around for very long (due to the lack of tar in vapor).

Most of the people I speak to actually have positive things to say about the smell my vape gives off. Most of the fruity or dessert flavors have a really appealing smell and aren’t hard to be around. That being said, there have been a couple of flavors that have left a rather displeasing smell for a short time… A particularly smelly blackjack flavor of e juice had my family reaching for the fresh air spray!

Is vaping safe in the house?

The chemicals present in vapor are far fewer and less harmful than those found in cigarette smoke. This makes vaping indoors a far less risky activity than smoking. With that being said, vapor is still unhealthy and does reduce the air quality around us.

My best advice here would be to use your common sense. If you have kids in the same house I’d personally advise against vaping indoors. In the same way that you wouldn’t let a child sniff glue or breathe in the fumes from a wood fire, the vapor produced from e cigarettes is still going to be harmful to a degree.

And that’s ‘vape smoke’ in a nutshell folks! I hope you’ve enjoyed the post and found some useful information about the key differences between vapor and smoke…