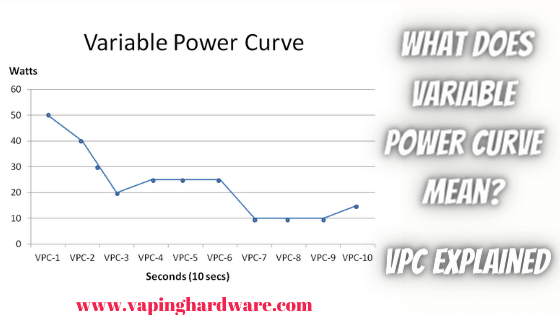 Variable Power Curve (VPC) is an advanced function or mode option on some mods. This mode enables the user to customize different power levels (wattage) in set increments, providing a power curve over a puff duration (time).

VPC was first introduced about 3 years ago and was only found on a handful of high-end mods. Technology has advanced with more complex control chip-sets and this mode of control is now available on a lot more mid range mods.

Prior to variable control curves, the standard for vaping in wattage mode, was to set the power level that you wanted to vape at. Most mods, unless fixed output power mods, are variable wattage devices (VW). The user will set a single wattage they want to vape at depending on the coil/tank being used.

When you press your fire button, whatever you’ve set your wattage to be, will be the power you’ll be vaping at. This means that the power being applied to your coil will remain constant throughout the time you’re pressing the fire button.

If you set your wattage to 20W, when the fire button is pressed, 20W will be applied to the coil. This wattage will remain constant until you release the fire button or the timer cut-off is activated, normally a 10 second cut-off.

Now comes the exciting bit… We have an alternative!

Selecting this option means you can tailor or customize the wattage/variable power curve, being applied to your coil over the duration of the firing cycle. We can increase or decrease the wattage in fixed points throughout the firing time.

Mods will have a safety cut-off of 10 seconds, sometimes adjustable, to prevent prolonged firing. If we break down the 10 second fire cycle into 1 second steps, we can set the variable power curve steps for each second of vaping.

For the purpose of explaining this procedure, I am using and referencing the Freemax Maxus 50W mod. Other mods will use slightly different terminology but the principles are the same.

When you enable the variable power curve setting on your mod, it will allow you to set the wattage you wish at each point. This will be indicated as VPC-1, VPC-2, VPC-3 etc, through to VPC-10.

The above images show the individual screen shots for each VPC setting. The power values are just for demonstration purposes only to indicate how the curve looks at the different power levels. Each individual wattage value that’s been set is shown to the right of the graph being generated.

For a more realistic VPC and the steps needed to set up your own variable power curve, I’ve outlined the steps below.

Set VPC-1 to your initial wattage, let’s say 40W. Enter this level and go to the next VPC setting. This basically means that when you press your fire button, the mod will fire at 40W for 1 second.

Now set VPC-2 to 30W and press enter to go to the next level, VPC-3. This now means when you press the fire button, you will be vaping at 40W for 1 second and at 30W for the next second.

Repeat the VPC steps for all settings till you’ve completed all of the variables, selecting different power levels at each step. Now when firing the mod, it will vape for the duration of the 10 second cycle period at the individual wattages you’ve specified in each VPC step.

You don’t have to set each VPC setting to different wattages, it’s completely down to your own personal preference. You may want to heat the coil initially for 2 seconds then drop down for another 3 seconds, then increase it again to give you another kick in power.

Once you’ve completed setting your variable power curve, the display will show a graph representing the power curve you’ve specified.

You can switch between normal power mode or VPC mode if you wish. The settings you’ve programmed will be saved and re-called when you go back into VPC.

Equally, if you want to fine tune your power curve or use a different coil/tank, simply amend any of the power levels you’ve previously set.

VPC can have several advantages over standard wattage mode. If the coil you’re using is a complex clapton coil, this will have a large cross sectional area. An initial high wattage will be needed to heat the coil to vaporize the e-liquid. This is often referred to as initial ramp-up or pre-heat.

Once it’s been heated at the initial high power, the coil will remain hot, meaning only a lower wattage is required to maintain that same temperature.

By setting the VPC to a 1 or 2 second high wattage, you can reduce the wattage on the next subsequent settings, still theoretically giving you the same vape but at a lower wattage.

This will improve the battery life as you’re not constantly hitting the coil using the same high power. Equally, by tailoring your power curve in this manner, you’ll in some cases improve the lifespan of your coil.

Reducing the wattage after an initial higher power ramp up can also help in preventing dry hits. This in turn will also help in providing cooler vapor.

What Wire/Coil Types Are Suitable For VPC

Because VPC is the adjustment of wattage at different time intervals, this mode is only useful for wires/coils that are used for variable wattage mode only.

Kanthal A1, Nichrome and Stainless Steel are the most common types of wires/coils used for variable wattage. Titanium and Nickle shouldn’t be used as these are specific to temperature control vaping only.

There are a few mods on the market that have the option of Variable Temperature Control (VTC). This is basically the same as VPC but you vary the temperature levels rather than the wattage.

Mods That Have VPC Mode

There are more and more mods on the market these days that give you the option of selecting variable power curves. Certainly the ones I’ve come across are:

There are many mods now that include the VPC function although not all of them call it VPC. Some will list it as variable wattage curves or something very similar.

Whatever individual manufacturers name it, it’s the ability to customize the individual wattage/power levels over the firing/puff cycle.

If you have a variable power curve option on your mod, it’s certainly worth taking a few minutes to set up and experiment with it. More and more I’m finding that I prefer vaping in this mode. Arguably it may be a little geeky, but it’s a nice way to further customize your vaping experience.

Hope you enjoyed this guide and found it useful. If you have any questions or feedback, please feel free to leave us a comment below.