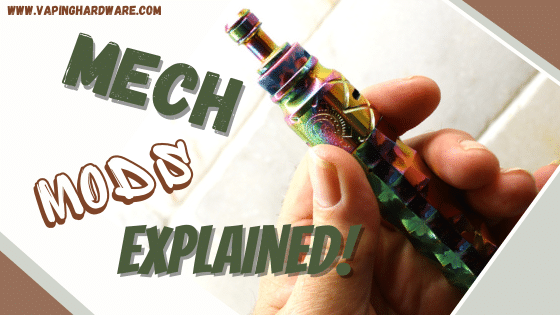 This type of mod came about in the early 2000’s and was basically a modified flash light (torch). A metal tube providing a secure and safe housing for the battery coupled with a switch to apply the battery voltage to an attached atomizer (tank).

Some say the term “Mod” comes from the broken down word…Modified torch. Because most torches were basically “Tube” shaped in design, the Tube mod became another slang word for a Mechanical mod.

Mechanical mods, otherwise known as Mech mods, Tube mods or Unregulated mods, are a simple straightforward design. They’re the simplest of all the vaping mods, yet should only be used by advanced vapers.

More on this later!

The term Mechanical mod was used primarily because there were no electronics involved. No wires, no printed circuit boards, no regulation and definitely NO safety features.

Their design and operation is purely mechanical and unregulated, hence the name(s).

Components of the Mechanical Mod

Mechanical mods have very few components and are broken down into the following parts:

How do Mechanical Mods Work?

When the 3 individual threaded sections, the switch, the 510 connector and the housing with its battery are connected together, they form the basis of the mechanical mod.

Now, when the atomizer (tank) or an RBA/RTA is screwed into the 510 connector, once the switch is operated, current will then flow through the tanks coil. This in turn will heat up the tanks coil and vaporize the e-liquid in the tank.

An important thing to remember here is when you press the switch/button, the power of the battery will be unleashed onto the coil. There are NO safety features, there is NO protection. You WILL draw current from the battery.

Also the power (wattage) you will be vaping at is defined by the coil resistance. There are NO wattage adjustments on a mechanical mod, hence you DO need to understand the principles of Ohm’s Law.

Who are Mechanical Mods for?

Because there is no regulation, no safety and no safeguards when using these mechanical mods, only advanced vapers with the following knowledge should use them.

Mechanical mods are usually associated with the more experienced vaper and those who build their own coils. They are often preferred and admired by vaping enthusiasts.

The styling and engineering of some of these mods can be quite simple but in other cases can be truly inspiring.

Also, in the early years of vaping, a mechanical mod with a RBA was the only way of achieving high wattage vaping.

Why would you want to buy a Mechanical Mod?

As I’ve mentioned earlier, even as little as 5 years ago, if you wanted to vape at say 50 or 100 watts, there were no regulated mods capable of reaching this high power. This could only be achieved by using a mechanical mod.

Now-days there are many regulated mods on the market that can provide in excess of 200 watts. Therefore the need to vape at high wattage is satisfied by both regulated and un-regulated mods now.

So to answer the real question, my prime reason for buying a mechanical mod now is the longevity of the device.

I currently own around 40 different mech mods. Most of these bought between 2015 to 2018, although I do still treat myself to the odd one now and again.

In all that time I’ve never had one break on me. They are virtually indestructible. There is nothing to go wrong with them.

Unlike regulated mods or pod mods that are mass produced and are electronically controlled, it’s the electronics that normally fails after a year or two.

Before you say or pull me up on this….yes than can and do fail sooner. One of the quickest to break on me was a Smok VFin 160 which sadly broke after 3 weeks.

I’m not laying blame that the electronics are no good, but when dropped or e-liquid has seeped into the insides, it’s this scenario that will cause the devices to fail.

A simple straightforward question but one that raises a lot of discussion.

No!… If you understand how they operate. If you know the relationship between voltage, current and resistance (Ohm’s Law)… If you understand current drain from your battery, then they are no more dangerous than any other type of mod.

Yes!… If you’re a novice vaper. If you really don’t understand the basic principles you could be heading for disaster.

Your Battery and Coil are the two most important factors you need to worry about. We have written several guides on Battery Safety and Coil Building and I strongly suggest you read these before you jump into the world of mechanical mods (see further reading).

If your coil build resistance is too low for the battery you’re using, then when you fire the mechanical mod, current WILL be drawn from the battery beyond its capability. If this happens, your battery in the worst case scenario could explode.

Equally, if you’ve built a coil and not tested it before you fire your mech mod and it’s shorting against the tanks case, your battery will draw excessive current and again could potentially explode.

In reality, most things we use in our daily lives, in the wrong hands can be termed as dangerous. It’s not the device but the user that operates it!

How to use a Mechanical Mod

Even though there are many different designs of mechanical mods, their method of assembly and operation is basically the same.

If we look at the standard 3 components, the battery housing, the switch and the 510 connector, we can assemble in the following order.

With most mechanical mods, there will be adjustments you can make to all three sections to enable the battery to fit and operate correctly. The idea is to make sure the battery doesn’t rattle around within the 3 sections.

The switch length can normally be reduced or increased by screwing its contact pin clockwise or anticlockwise. Equally, the contact pin on the underside of the 510 connector can be adjusted by this method as well. In most cases it will be a combination of these two adjustments that gives the best fit.

Some mechanical mods will also have adjustment on the battery housing itself. If the housing is in 2 or 3 parts, these are normally adjustable in length to take up any slack on the battery.

Never over-tighten any of the sections as this will impair operation and could distort the positive top cap on the battery.

Once you’re happy that the sections are assembled correctly and everything feels right, screw your tank into the 510 connector.

Lastly, most bottom firing switches will have a threaded locking ring. This can be screwed in or out to stop the switch from operating. This is very important for when the mechanical mod is standing upright as the weight of the mod will operate the switch.

As we’ve mentioned earlier, mechanical mode are unregulated. This means no protection or control using electronic circuitry. If something goes wrong with your setup in terms of battery or coil, it could be potentially very dangerous. It WILL try to carry on working and that’s where the problems arise.

When using a mechanical mod, the vaping experience is slightly different. Maximum power (wattage) is achieved on a fully charged battery (4.2V). As the battery drains, the wattage will gradually decrease.

Even when the battery reaches its discharge state (3.2V), it will still work but with much less power. Using your battery lower than this voltage will stress the battery and cause irreversible damage.

Knowing when it’s time to re-charge your battery or replace with a fully charged one is down to experience. Until you become familiar in detecting when your battery reaches this level, always test the voltage of your battery.

Most 18650 batteries should not be used once they reach 3.2 volts. This is a standard safe cut-off voltage. Taking a battery below 3.0 volts will impair its ability to re-charge.

Using it even lower than 2.5 volts will make the battery become unusable. Once they go beyond this level, a normal battery charger wont charge it.

The alternatives to mechanical mods are regulated devices such as Pods and Mods.

These are packed with safety features to protect the user in terms of something going wrong, such as short circuit protection and over discharge etc. In most cases but not all, if a problem arises the regulated pod/mod will shut down to protect the user.

Because regulated devices have a control chip inside them between the battery and coil, this gives the user control over the wattage you want to vape at.

Irrespective of the coil resistance, you select the wattage you require. This wattage (vape power) will be delivered and remain constant from full battery charge to full discharge.

This is achieved by the electronic regulator chip inside the mod maintaining a constant wattage by regulating the voltage. Another function of this regulator is the pod/mod will shut down once the battery voltage reaches approximately 3.2V (low battery).

Instead of having a 510 connector, the positive top of the battery is directly connected to the center pin on the attached tank or RBA/RTA.

You can see from the photo above, the tank on the right will screw into the top section on the left. There is NO connector, just a threaded hole, therefore the 510 thread on the tank must NOT touch the battery, just the slotted center pin.

Designed to reduced voltage drop across the 510 connecter thus improving power to the coil. The danger with this design is not all tanks or RBA/RTA’s have a protruding center pin.

More often than not, hybrid mods are sold as a kit, therefore having a specific tank designed to work with that mod.

That’s good BUT not if you intend to use a different tank.

If you install a different tank onto the hybrid mod and the center pin doesn’t protrude beyond its 510 thread, you will be applying a direct short circuit to the top of the battery.

As we’ve said earlier, if this happens, you’ll be drawing excessive current from the battery and the result could be catastrophic!

As we have only touched on the basics in this guide, we recommend you take a look at the following individual guides. These will give you an additional in-depth understanding of the topics we have mentioned.

In general, mechanical mods do have their place in the market. Not as common as they used to be, but still worth having a couple in your collection.

When used by an experienced vaper who understands the dangers and knows the safety rules around its usage, they’re as safe as any other vaping device.

Their limitations are the lack of control and safety but the plus side is the robustness and longevity.

If you’re new to vaping and simply want to vape to get off the ciggies, steer clear of mechanical mods. I would recommend using either a regulated pod or mod until you feel confident with progressing further.

Hope you enjoyed this guide and found it useful. If you have any questions or feedback, please feel free to leave us a comment below.