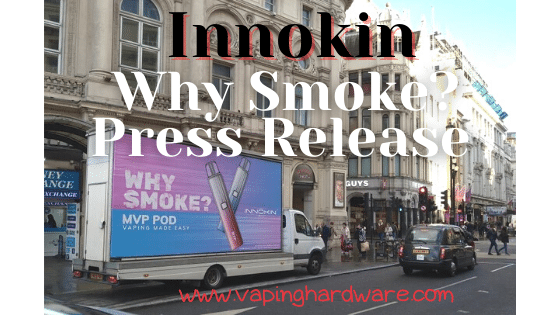 We have been working with Innokin during 2021 in reviewing their latest products and were kindly asked if we would like to help promote their ‘Why Smoke?’ campaign being launched in London, UK during November and December 2021.

With all the negative and misguided press in the world around vaping, it’s welcoming to see the UK openly promoting the benefits of transitioning from smoking to the less harmful alternative…vaping.

We commend Innokin for undertaking this promotion and as such have included their press release article below:

This is a sponsored post written and released by Innokin as part of their Why Smoke? campaign.

Innokin’s “Why Smoke?” vaping campaign hits the streets of London

London, UK – Innokin presents its “Why Smoke?” campaign in London, featuring branded buses, vans, and projection displays on buildings throughout the city.

Innokin is proud to create a vaping awareness campaign in the UK for the first time in two years. The “Why Smoke?” campaign is meant to make us think about our habits, even just for a moment. The campaign aims to inform smokers that there is an accessible, less harmful option to traditional cigarettes.

Advertising vaping products is a challenging task. There are many regulatory considerations, and this can make it very difficult to deliver a compelling message. Innokin is investing in vaping advocacy through a combination of traditional and innovation-led channels, intending to start an honest conversation about tobacco harm reduction.

Innokin’s “Why Smoke?” campaign begins November 26th.  Mobile billboards will travel throughout north and central London for four days, stopping in prominent areas to reach thousands of people each day. The mobile billboards introduce Innokin’s message to people all over the city.

On November 28th, large mobile projections will display impactful messages on iconic London buildings over two days. The projection locations were selected based on high foot traffic in densely populated areas. The projections are a mix of vaping awareness messages and promotional displays for the MVP Pod, Innokin’s newest vaping device.

On November 29th, Innokin’s traditional media campaign begins. The “Why Smoke?” message, along with promotional displays for the brand new MVP Pod, will appear on five-hundred buses throughout the British capital for two weeks. Garnering the general public’s attention is crucial to helping smokers transition to vaping.

Innokin has run promotional campaigns in the UK before. Previously, the vaping giant has partnered with the EFL to promote displays in football stadiums throughout the country and created two successful bus campaigns. Innokin is determined to help millions of smokers, not just in the UK but worldwide.

Making cigarettes a thing of the past continues to be the firm’s priority. “Why Smoke?” is just the beginning of Innokin’s mission to create a smoke-free future.

Well done Innokin for promoting vaping as the safer alternative to smoking and hopefully it WILL make people sit up and listen.

As for my own journey, I switched to vaping 7 years ago after smoking on average 30 a day for 35 years. Don’t get me wrong, I enjoyed smoking BUT it WAS affecting my health. For a while I was smoking and vaping with the aim to halve the amount of cigarettes I was having each day.

It wasn’t long before I found I preferred vaping and decided to make the switch permanent. Since then, my health has improved, my fitness increased and I no longer get short of breath. For me, this was the best thing I could of done and I’ve not looked back since.

We recently reviewed the Innokin MVP Pod Kit which features in this article so do take a look and see what it’s all about.

Hope you enjoyed this news item and found it enlightening. If you have any questions or feedback, please feel free to leave us a comment below.